Great quarterback play has obviously been somewhat of a calling card for Clemson over the past eight or so seasons, in addition to wide receiver and the defensive line.

Each year the best of the best is recruited by the Tigers and 2020 will be no different. There will be a bit of a twist with quarterback recruit Chandler Morris.

Most Clemson fans remember former offensive coordinator Chad Morris…well, Chandler is his son and it is safe to say that he will be one of the prizes in the 2020 class.

“They went really good,” he said. “Arkansas and Auburn offered me and Colorado said they’re gonna offer me after the first two games this season.”

It is still relatively early in the recruitment of the 6-foot, 170-pound Dallas (Texas) Highland Park product, but he already has offers from Arkansas, Auburn and Clemson.

Morris doesn’t have a favorite right now and still has plenty of time to take visits and pick favorites as he probably won’t make a decision until next summer.

“I don’t have a place that I’m favoring, I’m going to keep my options hundred percent open and take visits next spring,” he said.

Obviously, Morris has a strong connection with his father and Arkansas now that he is the new head coach there, but Clemson still has a place in his heart. The Tigers already have a step up on most of the competition due to his familiarity with the program and some of his old friends.

“Getting to see all my friends and the new facility back in Clemson,” he said. “And just getting to build a relationship with the coaches around the country.”

He currently does not have any upcoming visits set up, but may head back to Death Valley soon.

“I may come back to Clemson in a couple weeks but not sure yet,” said Morris. “I wanna try and get on the lake when I go back and see my old friends.”

Morris said his dad will definitely play a part in his decision, but “I will still be keeping my options open.”

Clemson still has a good shot with Morris, who said the Tigers have several things going for them.

“I love the family atmosphere they have and them being my first offer means a lot to me,” he said.

It will be tough to nab Morris from Arkansas, but the Tigers always have a chance with a top quarterback prospect. He still has plenty of time left so there shouldn’t be any major game-changers anytime soon. 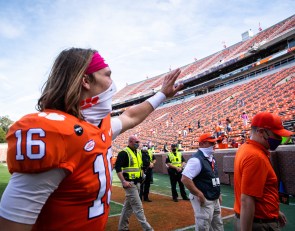 Clemson and Trevor Lawrence didn’t play their best game Saturday, but it was plenty to move to 6-0 and continue the march towards another championship. In this edition of the Two-minute drill Lawrence (…)

Clemson head coach Dabo Swinney said the Tigers ‘did some dumb things’ Saturday against Syracuse, but they still won easily. In this edition of the Two-minute drill Swinney talks about how Clemson didn’t take (…)

Clemson didn’t bring their A game Saturday, but lead Syracuse 27-14 at the half. Check out some pictures from the ACC showdown in the first half Photo Gallery.

Top-ranked Clemson went into halftime with a 27-14 lead against Syracuse on Saturday at Death Valley, but a couple of special team miscues cost the Tigers points and held them back from a bigger (…) 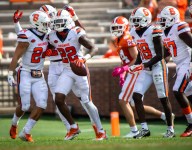 Top-ranked Clemson looked uninspired in the first half against Syracuse and entered halftime with a slim 24-14 lead. It’s lackluster performance to start the game showed on the stat sheet. The (…)