After a couple of bye weeks for contenders, the Heisman Trophy race is beginning to heat up with new names surfacing, while others have begun their decline.

With four weeks left in the regular season, here’s the second edition of our Heisman Trophy breakdown.

Ed Oliver, DT, JR., Houston: Oliver did not play in Houston’s last game and unfortunately for him, the game will work against him in the long run. With Houston beating undefeated USF impressively, Oliver loses some of that “carry the team” flare. 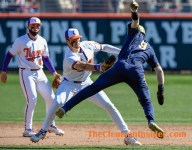 Sunday was a beautiful day at Doug Kingsmore stadium where Notre Dame defeated Clemson to win the series over the Tigers. Check out some of the action in Bart Boatwright’s Photo Gallery. 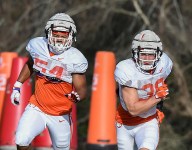 Clemson’s coaching staff feels like they have really hit home runs with the 2021 signing class. Twelve of the Tigers’ 19 signees enrolled in school in January and are participating in spring drills. (…)

A talented two-sport athlete from the Sunshine State has seen his football recruitment explode of late. Tampa (Fla.) Berkeley Prep tight end CJ Hawkins, a class of 2022 prospect, has picked up offers from (…)

Elliott isn’t taking anything for granted, especially at quarterback

If there is one thing Tony Elliott learned about 2020 … he is not taking anything for granted. Clemson’s offensive coordinator was one of several Tigers affected by COVID-19 last season, as he missed the (…)

NFL Hall of Fame quarterback Brett Favre took a lot of heat last month for what he said when weighing in on Deshaun Watson and his demand to be traded from the Houston Texans: (…)

CHARLOTTESVILLE, Va. — Clemson won its 10th straight game Sunday thanks to an 8-1 victory over Virginia at Palmer Park in Charlottesville, Va. The win completed a four-game sweep of the (…)

Clemson head coach Monte Lee talks about Sunday’s loss to Notre Dame and the series loss to the Irish. Lee discusses how an early curfew in ACC play limited his options in the ninth inning. Because of the Notre (…)

Other than giving up a solo home run to Clemson’s Caden Grice in the bottom of the sixth inning, Notre Dame pitcher Liam Simon was nearly untouchable in the four innings he pitched Sunday. Coming into the (…)

What They Are Saying: NFL teams are loving Rodgers

Former Clemson wide receiver Amari Rodgers, who Dabo Swinney has called a Pro for years, is drawing plenty of interest from NFL teams. In this edition of What They Are Saying we look at what is being said (…)