Four-star wide receiver E.J. Williams made another visit to Clemson this past weekend, and it won’t be his only trip to Tigertown this month.

The 2020 prospect from Phenix City (Ala.) Central returned to Clemson on Saturday after attending a couple of home games in the fall. He again came away impressed with the genuineness of the people associated with the program.

“It was a great visit for sure,” Williams told TCI. “Clemson is one of those places that doesn’t fake it. They don’t put on a face for me when I come there. It’s always the same.”

Williams earned an offer from Clemson in July after impressing the coaching staff with his showing at the Dabo Swinney Camp in June. Since then, he has stayed in regular contact with co-offensive coordinator/receivers coach Jeff Scott as well as Todd Bates, his area recruiter.

What did the 6-foot-3, 185-pound wideout hearing from the coaches while on campus?

“They were just telling me a lot about the 9-man position,” Williams said. “That’s what I would play if I went there. They said I could develop well and other things.”

On Saturday, Williams took in the Tigers’ national championship victory celebration at Death Valley from up close.

“I sat on the field when they were on the stage during the ceremony,” he said. “It was a great experience. I didn’t expect that many fans to show up.”

Clemson will soon get Williams back on campus, as he is planning to attend the Tigers’ elite junior day on Jan. 26. He is also slated for upcoming visits to Georgia, Florida State, Florida, Alabama and Tennessee.

Along with Clemson, Williams carries offers from schools such as Auburn, Alabama, Florida, Florida State, Georgia, LSU, Tennessee and Texas A&M. He claims no favorites right now and plans to make his decision in December.

Clemson head coach Dabo Swinney had plenty of praise for his team Monday following the team’s fourth day of spring practice. Swinney addressed the Kendrick departure, the play of his freshmen, DJ (…) 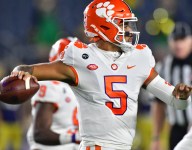 D.J. Uiagalelei updated his health status following the Tigers’ spring practice on Monday. The rising sophomore quarterback dealt with a shoulder injury during his true freshman season in 2020 but says he (…)

Dabo Swinney says he is not going to jump into the transfer portal because Derion Kendrick is no longer on the Clemson football team. Instead, he says the Tigers will wait and evaluate the situation when (…) 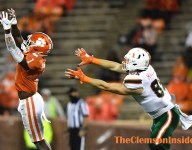 Clemson head coach Dabo Swinney did not want to get into why Derion Kendrick is no longer with the football team anymore, and instead said he wishes his former cornerback all the best. “There is really not (…) 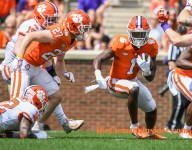 Clemson head coach Dabo Swinney addressed the departure of cornerback Derion Kendrick after Monday’s practice. Sunday the news broke that Kendrick was no longer with the Clemson football team. (…)