The Tigers surged ahead 3-0 in the bottom of the second inning with some timely hitting.

Bryce Teodosio led off with a single, stole second base and reached third on a wild pitch. After Sam Hall walked, both Hall and Teodosio advanced on a sacrifice fly by Logan Davidson that scored Teodosio and put Clemson up 2-0. Grayson Byrd bumped the lead to 3-0 on an RBI single giving the Tigers a 3-0 lead after two innings. 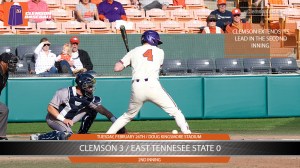