A large group comprised of some of the country’s top class of 2020 prospects will gather at Clemson on Saturday when the Tigers hold their second junior day of the year.

Fleming, the top-ranked wideout in the 2020 class, received an offer from Clemson last summer and named it one of his top six schools last month along with Penn State, Ohio State, Alabama, Georgia and Oregon.

This marks the first visit to Clemson for Fleming, who will likely make his decision after his upcoming senior season. Penn State is viewed as the frontrunner right now, but the Tigers have put themselves squarely in the mix. “They’ve made me feel like a priority,” Fleming told The Clemson Insider recently. “So, they’re one of the schools at the top of my list and have done a great job setting themselves apart.” 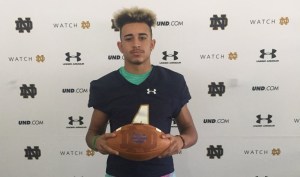 Henderson will return to Clemson on Saturday after stopping by campus last month. He picked up an offer from the Tigers in January and also holds offers from Florida, Miami, Florida State, Alabama, Auburn, Georgia, LSU and Penn State, among others. Henderson visited Florida and Miami in February. His older brother, C.J., started all 13 games for Florida last season.

The Tigers will get Williams on campus for the second time in as many weekends. He also visited Clemson last Saturday, following a visit to Tennessee, to spend time with his former Central High School teammates, Justyn Ross and Ray Thornton. Last month, Williams announced a top 12 that included Clemson along with Alabama, Auburn, Georgia, Texas A&M, Oregon, Ole Miss, Tennessee, Florida, Florida State, LSU and Arkansas.

Another marquee name expected to make his way to campus is Southlake (Texas) Carroll four-star defensive back R.J. Mickens, the No. 1 safety in the 2020 class according to multiple recruiting services. Mickens, the son of former Texas A&M All-American and NFL defensive back Ray Mickens, will be accompanied on the visit by his mother. He most recently visited Clemson for the Louisville game in November and made the trip to campus last June as well. 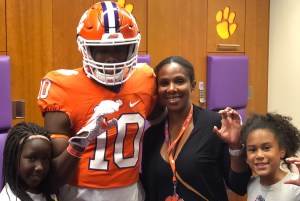 R.J. Mickens with family at Clemson in June 2018

Another prospect from the Lone Star State is tentatively slated to attend the junior day in Houston (Texas) C.E. King four-star safety Bryson Washington, who earned an offer from Clemson last September to go with offers from Texas, Texas A&M, Alabama, Auburn, Georgia, LSU, Oklahoma, Ohio State, Florida State and others. He is planning to commit around the fourth of July.

As always, the visitor list is subject to change and we will keep you posted on any potential additions or scratches. Stay tuned to TCI all weekend for coverage of and reactions from the Tigers’ junior day.

When top-ranked Clemson hosts Virginia Saturday at Death Valley, the Cavaliers are going to be anxious to put on a better showing against the Tigers than they did the last time the two met. Of course, the (…)

A week after making his first start at right tackle, Jordan McFadden earned co-offensive player of the game honors from his Clemson coaches. The Spartanburg, S.C., native is a huge part of what (…)

Clemson head coach Dabo Swinney plans to change things up a little bit when he runs down the hill on Saturday prior to the top-ranked Tigers’ game against Virginia. Typically, Swinney races down the (…)

Clemson head coach Dabo Swinney was asked four straight questions in his Tuesday press conference that were related to Black Lives Matter. Watch below as Swinney responds to the questions. (…)

Clemson head coach Dabo Swinney was asked Tuesday to respond to his statement from his Monday night call-in show when he alluded to the fact, he does not like to mess with the Tigers’ uniforms for any (…)

When Clemson beat The Citadel on Sept. 19 at Death Valley, Derion Kendrick did not start the game. After being on the inactive list for the Tigers’ season-opener at Wake Forest, Kenrick watched the first (…)