Uiagalelei, the nation’s top-ranked quarterback, has made the trip to Clemson on a couple of occasions. But this time around, he will bring his whole family with him.

“I’ll be there. Me and my mom, my dad, my brother and one of my coaches,” Uiagalelei told The Clemson Insider recently.

Uiagalelei first visited Clemson during the Dabo Swinney Camp last summer, then returned with his father for the South Carolina game at Death Valley in November.

Next month’s visit will mark his mother’s first time on campus.

The spring game will allow Uiagalelei another in-person look at Clemson’s offense – an offense he can envision himself fitting right into if he were to play for the Tigers.

“I feel like I would fit great,” he said. “Basically, it’s similar to the things that I run at my school right now. That’s one thing I like about Clemson, is all the different reads and stuff they have. I feel like it would be a perfect fit for me.”

Seeing what Trevor Lawrence was able to do as a true freshman last season – come right in, compete for the starting quarterback position and ultimately win it – appeals to Uiagalelei when he looks at Clemson as one of his college options.

“I mean that’s all you want as a player, to be able to come in and compete for a starting job,” Uiagalelei said. “You don’t want anything given to you. You want everything earned. That’s what he did, so it’s pretty cool to see that’s what they do at Clemson – that whoever the best player is, they play on the field. So, that’s good to know. That’s what you want to know as a recruit.” 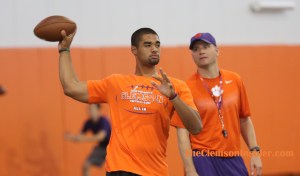 Uiagalelei throws a pass at the Swinney Camp in June 2018

More than anything, though, the faith-based culture that Swinney has instilled within his program stands out to Uiagalelei.

“I love the football, the atmosphere and coaches and stuff. But probably for me, my favorite thing is how faith-based (the program is),” he said. “I’m a really big Christian. Jesus is my Lord and Savior. I keep Him first in my life.

Also working in Clemson’s favor with Uiagalelei are his relationships with Swinney and quarterbacks coach Brandon Streeter.

Uiagalelei said the Clemson spring game is the only visit he has planned to date. Asked about his commitment timeframe, he pointed to the possibility of an early summertime decision.

As a junior last season, Uiagalelei completed 70 percent of his passes for 3,666 yards and 48 touchdowns with just seven interceptions. He also ran for 312 yards and six scores.

Uiagalelei is considered the No. 1 quarterback in the country for the 2020 class by all the major recruiting services, and Rivals ranks him as the No. 1 prospect nationally regardless of position.