This week, the 6-foot-5, 225-pound defensive end returned to campus to compete at the Dabo Swinney Camp for the second straight summer.

“I had a great time,” Denhoff said. “The coaching was outstanding and the overall camp experience was really a fun atmosphere.”

Denhoff participated in the full three-day session of the Swinney Camp and received positive feedback from defensive ends coach Lemanski Hall and other staffers about his performance.

“They told me I had an excellent camp and that I led the DE group well,” Denhoff said. “They said I looked like I had improved well on my agility and pass rush.” 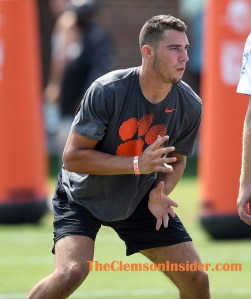 The rising junior prospect would not be surprised to see Clemson pull the trigger sooner or later.

“They said they are still evaluating,” he said, “but I think an offer could definitely be a possibility in the future.”

The Tigers are in a good spot with Denhoff and would be in even better shape with an offer.

“I would say the Tigers are high on my list right now for my recruitment,” he said.

Denhoff said he likely won’t make his decision “any time soon,” but hopes to commit by the midway point of his junior year, if not sometime next spring.