An in-state O-line prospect that grew up a Clemson fan traveled to Tigertown for the Dabo Swinney Camp earlier this month in hopes of further establishing himself on the program’s recruiting radar.

Chapin (S.C.) offensive tackle Thornton Gentry worked out for the Tigers on June 12.

“I really enjoyed it,” he said. “I felt like I got to learn and show my skill set to the coaches at Clemson.”

Gentry (6-4, 285) had a great experience camping with and learning from offensive line coach Robbie Caldwell. 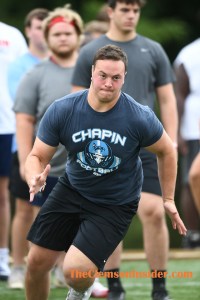 “I always enjoy being around Coach Caldwell,” Gentry said. “He’s a coach with a lot of knowledge of the game of football and he is a very wise man with lots to teach young men.”

Gentry heard good things about his camp showing after bouncing back from a slow start.

“I was told that I performed well,” he said. “I had a rough first session but a great second session.”

Gentry is garnering early interest from schools such as North Carolina, Kentucky, Tennessee, Wake Forest, Michigan State and South Carolina along with Clemson.

“I grew up a Clemson fan,” he said. “Clemson has always just been a great environment to be in, and to receive an offer from Clemson would mean the world to me.”