E.J. Williams gives the latest at The Opening Finals

E.J. Williams gives the latest at The Opening Finals

The Opening Finals is about more than just football and competition, and Phenix City (Ala.) Central four-star wide receiver E.J. Williams is enjoying the full experience.

The Clemson Insider is in Frisco, Texas, for The Opening Finals and caught up with Williams there.

“It’s really a lot of fun,” he said. “A lot of great opportunities out here to get coached up by some of the best coaches all around the world. And really spending time with the cancer kids — they’re great people, great kids, just sharing their stories with us… It’s just overall a great time here at The Opening.” 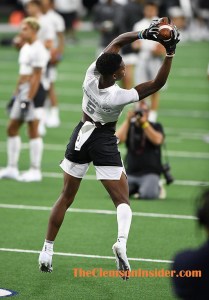 Williams, one of Clemson’s few remaining targets in the class of 2020, remains set to announce his commitment on Aug. 24. Alabama, Auburn and LSU are other teams in the mix.

The Tigers will have another chance to solidify their already strong standing with Williams when they get him back on campus next month. He said he “most definitely” plans to attend Clemson’s All In Cookout in late July.

As his decision date approaches, Williams will be looking closely at a few things when weighing his college options, including his comfort level at the schools and relationships with the respective coaching staffs.

“Really just having a relationship with all the coaches, just having a great feeling on the campus every time I’m on campus,” he said of the main factors in his decision. “Feeling like I’m comfortable, and just getting the opportunity to start as a freshman or at least get on the field if I work hard and prove my talents.”

Williams of course played with Justyn Ross at Central High School before the latter moved on to Clemson last year.

Ross hopes to see his close friend join him in the Tigers’ receiving corps next year but isn’t pressuring Williams.

“He really wants me to come to Clemson,” Williams said of Ross. “But overall, he just wants me to go where I feel like I fit best and what’s best for me, not him.”

Stay tuned to The Clemson Insider for plenty more coverage of The Opening Finals this week.