This week at The Opening Finals in Frisco, Texas, consensus five-star recruit and Clemson commitment Bryan Bresee has lived up to his billing as one of the best prospects — if not the best — in the country for the class of 2020.

The 6-foot-5, 290-pound defensive lineman from Damascus, Md., has been dominant over the past couple of days while facing off against other elite talent.

“There’s some super good competition, and it’s always fun to go against everybody like that,” Bresee told The Clemson Insider.

Bresee certainly isn’t the only Clemson commit that has impressed this week, though. His fellow D-line commits, Demonte Capehart and Tre Williams, have also performed very well.

“I think the D-line as a whole, especially the Clemson commits, we did really well out there,” Bresee said. 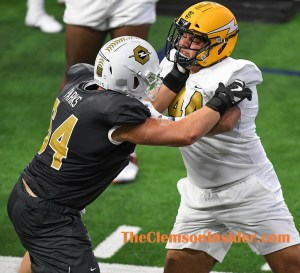 The Opening Finals have provided a little preview of what’s to come in practice at Clemson in the future, as Bresee, Capehart and Williams have been able to go up against their future teammates on the other side of the ball – offensive linemen Walker Parks, Mitchell Mayes and Paul Tchio.

“It was good. It was fun. It’s exciting to go against them before we get to college and really go against each other,” Bresee said. “It’s fun to get out here, and even the people that aren’t coming to Clemson, just compete with them and people you’ll be seeing in a real game in a couple years.”

Meanwhile, off the field, Bresee has been working hard to help Clemson’s historic 2020 class get even better as he tries to get guys like linebacker Justin Flowe and defensive end Jordan Burch on board with the Tigers.

“I talked to Justin a bunch. I was on the phone with his grandma the other night,” Bresee said. “So, I’m working on him pretty good, and Jordan Burch and all those guys as well.”

Bresee is ranked as one of the top 10 prospects in the nation by all of the major recruiting services. He is the No. 1 overall prospect in the 2020 class according to 247Sports.