“Iron sharpens iron” is a phrase Clemson fans are probably familiar with, having heard coach Dabo Swinney say it often in reference to his talented players making each other better when battling in practice.

The Clemson Insider caught up with Tchio earlier this week about his experience at The Opening Finals, what it was like to go up against his future teammates and more.

“It’s just like iron sharpens iron,” he said. “They’re making me better, just like I’m making them better. That’s the whole point of this. We’re out here getting better.”

When they weren’t facing off on the field, the eight Clemson commits in attendance at The Opening Finals could be found hanging out and bonding off the field.

“It’s pretty cool because I think we do have the most commits out here,” Tchio said. “We’ve all been vibing this week, just getting to know each other more because we’re going to be playing together for the next four years. It’s good getting to know the rest of the guys.” 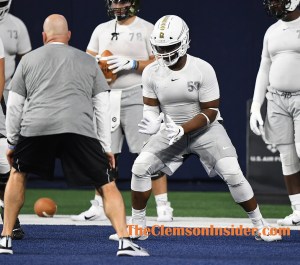 Tchio came to The Opening Finals as an outstanding player, but knows his time there made him even better thanks to the first-class competition and coaching he received.

“We definitely learned a whole lot because these coaches are some great coaches, some of the best coaches out there,” he said. “Just little things, like tweaking our stance, it goes a long way.”

Tchio is the No. 5 offensive guard and No. 119 overall prospect in the 2020 class according to the 247Sports Composite rankings. The Milton (Ga.) High School standout committed to Clemson on Nov. 25, 2018.