Clemson commit Walker Parks put on a clinic at The Opening Finals this week in Frisco, Texas, and was one of the best performers in his position group at the event. Thus, the Lexington (Ky.) Frederick Douglass offensive lineman received the honor of being recognized as one of the “Final Five,” or top five, O-linemen by The Opening Finals staff.

One of the reasons that Parks made the Final Five was that he held his own against fellow Clemson commit Bryan Bresee, the consensus No. 1 defensive tackle in the country.

“It was amazing!” Parks said. “Me and Bryan whooped each other all camp so I wasn’t worried about the Final Five, just finishing our battle!” 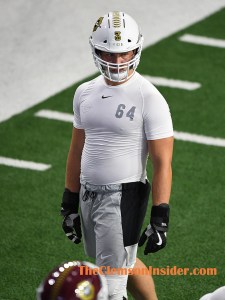 Parks described his battles with Bresee as “tough.” It was a preview of what’s to come with the two future teammates in practice at Clemson in the future.

“He’d put me on my face then I’d pancake him, then he’d bulrush me and into the bag and I’d punch him hard,” Parks said. “It just went back and forth. He made me such a better player.”

Clemson offensive line coach Robbie Caldwell heard about Parks’ great showing at The Opening Finals and reached out to congratulate him.

“Coach Caldwell was very excited and congratulated me a ton on everything,” Parks said.

When Parks looks back on his experience at The Opening Finals down the road, it won’t be making the “Final Five” that he remembers most, nor his battles with Bresee. Instead it will be something more meaningful.

“Most thing I’ll remember is working with NEGU (Never Ever Give Up/Jessie Rees Foundation) kids,” Parks said. “This young man named Ryan had beat cancer and was going to play his first season of tackle football. That made my heart full and seeing him smile was the greatest thing ever. I’ll never forgot that young man and I hope he crushes people this season.”