One of the few underclassmen prospects invited to attend The Opening Finals in Frisco, Texas, this past week was Lexington (Ky.) Frederick Douglass wide receiver Dekel Crowdus, the top-ranked prospect in the state of Kentucky for the class of 2021.

The four-star recruit was honored to have the chance to compete against the best and feels he held his own against the older players.

“I just felt very blessed having the opportunity to be invited to go against the top upperclassmen in the nation,” Crowdus told The Clemson Insider. “I feel like I did good.” 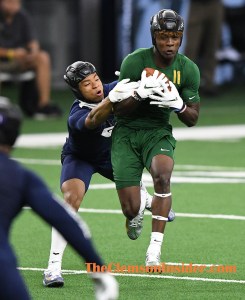 Crowdus is close friends and teammates at Frederick Douglass High School with Clemson commitment Walker Parks, who also participated in The Opening Finals and was recognized as one of the top five offensive linemen at the event following an excellent showing.

Crowdus traveled to Clemson with Parks last month to participate in the Dabo Swinney Football Camp and enjoyed the experience.

One of the things Crowdus liked about Clemson was the “Graveyard” at the entrance to the practice fields behind the Jervey Athletic Center, where the Tigers keep their tombstones commemorating their road wins over ranked opponents under Swinney.

“I did like whenever you go to the practice fields and there’s a graveyard,” he said. “That was pretty cool. That stood out to me.”

If the Tigers were to offer in the future, Crowdus would love to have the chance to suit up with Parks in Death Valley.

“It would be fun to play with my dawg in college,” he said.

Crowdus said he would like to set up another visit date to Clemson.