After securing a commitment from 2020 tight end Sage Ennis in June, Clemson can shift its focus to recruiting the position for the next cycle.

Thus far, the Tigers have only extended one offer to a tight end in the class of 2021: Jake Briningstool of Brentwood (Tenn.) Ravenwood.

Briningstool earned the offer after camping at Clemson last month, and he is scheduled to visit campus again for a game early this season.

“I’m looking forward to getting back to Clemson Week 2 when they play Texas A&M,” he told The Clemson Insider.

What is Briningstool looking to get out of the return visit to Death Valley? 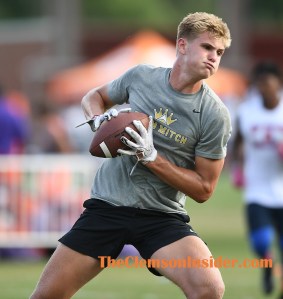 “Nothing specific,” he said. “Just get around the team and get a feel for the players and keep building relationships with the coaches.”

Speaking of the coaches, Briningstool feels Clemson’s staff is among those showing the most interest at this point in his recruiting process.

“Definitely I would say Clemson, Miami and Georgia are the schools I feel the most wanted by,” he said.

Briningstool, a rising junior, isn’t exactly sure when he will make his decision but knows it will be before his senior season next year. The program that ultimately lands his commitment will have checked off the specific boxes Briningstool is looking for.

“The most important factor for me is definitely my relationships I have with the coaches and how I’ll fit into the offense,” he said.

Briningstool hasn’t formally announced his top schools yet but Clemson has already cemented itself as one of his favorites.

“Clemson definitely stands near the top of my list,” he said.

Briningstool checks in as the No. 7 tight end in the 2021 class according to 247Sports, while Rivals ranks him as the eighth-best prospect at his position in the next cycle.