Kirkland floored to be named to Clemson’s Ring of Honor

Kirkland floored to be named to Clemson’s Ring of Honor

Knows his late father would be proud

When Tim Bourret called Levon Kirkland up earlier this week and told him he will be inducted into Clemson’s Ring of Honor later this fall, the first people he thought about was his parents, Lavern and Helen Kirkland.

“The main thing I thought about was my father’s last name, my mother’s last name, is going to be on the stadium. And to me that is amazing,” Levon Kirkland said to The Clemson Insider on Friday.

It also reminded the former All-American and All-Pro linebacker of a conversation his father had with him one day after church, just a few years after he retired from the NFL.

“I remember him telling me that he never thought a son of his would be able to go to Clemson,” Kirkland recalled. “I was like, ‘What do you mean by that?’ He was just like, ‘Well, Son, we (African Americans) could not go through the front door back in the day. To see you play for Clemson, it was amazing. It is wonderful.’

“I think about those comments and to be able to honor him by being a part of the Clemson tradition forever, I’m floored.”

Clemson officially announced Kirkland as a Ring of Honor inductee on Friday, just the ninth person on the exclusive list from the football program. He will be honored during a football game later this fall where his name will be etched in the stone of Memorial Stadium, alongside the 1981 National Championship Team, Banks McFadden, Steve Fuller, Jerry Butler, Jeff Davis, Fred Cone, Terry Kinard, Frank Howard and Danny Ford.

“I think about what my parents gone through and what they did as far as raising all of us Kirklands,” Kirkland said. “They are not here now. I wish they were. But it blows me away. It really does.”

Kirkland played at Clemson from 1988-’91, helping the Tigers to two ACC Championships and a 39-8-1 record. He finished his career as a 2-time All-American and a 3-time All-ACC selection. He was part of a Clemson defense in 1990 that led the nation in yards allowed.

In 1989, he was named the Most Valuable Player in Clemson’s Gator Bowl win over West Virginia. That night Clemson stuffed Heisman Trophy Finalist Major Harris, while Kirkland was credited with nine tackles, a sack and three quarterback pressures. He also had eight tackles in Clemson’s 1988 Citrus Bowl win over Oklahoma. 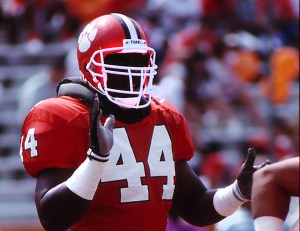 Kirkland finished his career with 273 career tackles, 40 tackles for loss, 19 sacks and four interceptions. He started 43 games in his career, a Clemson record for a linebacker.

It is a career that might not have happened had it not been for another conversation he had with his high school coach at Lamar, Terry Styers, in the 10th grade.

“He sat me down and he was like, ‘Son, if you commit to this game. You will be able to go to college and play college ball.’ Honestly, I believed what he said,” Kirkland recalled. “I was like, ‘Okay!’ From that day forward I just really committed to the game of football.

“I always had these visions about playing not only in the NFL, but also getting a chance to play big-time college ball. When Clemson and South Carolina recruited me, that was huge for me. Being told that I would have an opportunity and I was not promised anything, was more than I needed. There was always someone along the way that gave me confirmation and I just kind of took it.”

At Clemson, Kirkland said he was challenged by guys like strength coach Gary Wade, graduate coach Gene Chizik and coaches Miles Aldridge, Tommy West and Bill D’Andrea. They all thought if he continued to work hard, he could become one of the greatest linebackers to have ever played at Clemson.

“I kind of took that challenge and said, ‘Alight, I can be that guy,’” Kirkland said.

His 176 career games in the NFL, ranks sixth all-time among former Clemson players.

“To be in the Ring of Honor is a testimony of just believing in yourself and having faith,” Kirkland said. “I remember as a kid watching guys like Jeff Davis, Homer Jordan, Terry Kinard and that 1981 team winning he national championship. That was amazing to see a team from South Carolina make that happen.

“So, I have to thank that team. They inspired me. To be a part of Clemson’s history is amazing and to now be a big part of it means a lot to me.”