Clemson adds another top talent to Wide Receiver U

Clemson adds another top talent to Wide Receiver U

Clemson has added another big-time talent to “Wide Receiver U.”

Clearwater (Fla.) Academy International 2020 wide receiver Ajou Ajou announced his commitment to the Tigers on Saturday, a day after attending their annual All In Cookout on Friday. He chose Clemson over an offer from Nebraska and many others.

“My journey hasn’t always been the easiest but I will be continuing my grind @ Clemson University.” 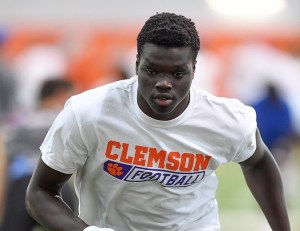 Ajou Ajou at the Dabo Swinney Camp in June

Ajou (6-4, 220) received an offer from Clemson after working out at the Dabo Swinney Camp in June.

A basketball player and high jumper from Canada, Ajou moved to the U.S. at the beginning of this year. He has yet to play a down of organized football in the states but nonetheless collected offers from close to 30 schools, including Clemson, Nebraska, Alabama, Florida, Florida State, Miami, Penn State, Auburn, Oregon, Tennessee and Texas A&M among others.

Ajou is a raw but gifted athlete with tremendous upside, hence why so many schools threw their hats in the ring. Expect him to be an impact player for WRU in the future.

Ajou becomes Clemson’s first commitment from a receiver and 19th total commitment in the 2020 recruiting class.

Clemson’s class ranks No. 1 nationally according to the 247Sports Composite. Alabama, LSU, Ohio State and Notre Dame currently round out the top five.