Powder Springs (Ga.) McEachern four-star Dacari Collins is in a fortunate position as one of just a few wide receivers in the class of 2021 that have earned an offer from Clemson.

The interest between Collins (6-4, 200) and Wide Receiver U is certainly mutual, and the Tigers are set to get him back on campus soon – in Week 2 of the college football season.

“My next time there will be when they play against Texas A&M,” Collins told The Clemson Insider.

Collins added that he is “very excited” for the game-day visit and offered his prediction for the outcome of the marquee matchup.

“Of course Clemson is going to win,” he said. 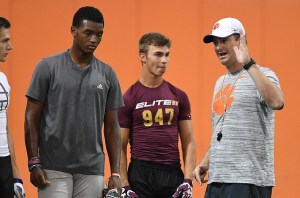 Collins was most recently on campus in June, when he received an offer from the Tigers after working out for co-offensive coordinator and receivers coach Jeff Scott at the Dabo Swinney Camp. Scott likes Collins a lot and sees him as a fit for the 9-man position in Clemson’s offense.

Overall, Collins has visited Clemson several times over the years.

“I always have a good time and it always feels like home,” he said.

Collins doesn’t have a clear timeline for his commitment decision, but the Tigers have put themselves in a strong position with the stud receiver at this stage of the recruiting process.

“They stand very high on my list,” he said.

Collins most recently visited Georgia on Friday and Auburn on Saturday. He named LSU, Alabama and Auburn as some of the other schools he plans to visit this season along with Clemson.