Steilacoom (Wash.) five-star Emeka Egbuka – the No. 1 wide receiver and one of the top overall prospects in the 2021 class – received an offer from Clemson in June.

“It was a pretty big offer,” he told The Clemson Insider. “Pretty surreal.”

Egbuka (6-1, 190) reciprocated the interest by traveling to Clemson for an unofficial visit on July 27 as part of a Southeastern swing that also included stops at Alabama and LSU.

“It was a really good visit,” he said of Clemson. “The first visit is always pretty informational, and I got a lot of good facts about Clemson to help make my decision a little easier.”

Egbuka was able to tour the facilities and spend time with several staffers, most notably co-offensive coordinator and receivers coach Jeff Scott.

“He wants to help recruit me, and he thinks I can be a staple in this ’21 class to get it rolling,” Egbuka said of what he heard from Scott. “And he’s just excited about my ability and excited that I was able to get on campus.” 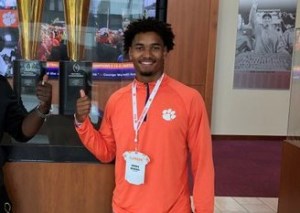 Along with the schools mentioned above, Egbuka holds offers from the likes of Florida State, Michigan, Notre Dame, Ohio State, Oregon, Stanford, UCLA, Washington and many others.

With 30 college offers to choose from in total, Egbuka is working to narrow down his recruitment but currently has no timeline for his decision.

“I haven’t thought about a commitment, but I should have a top-10 list coming out fairly soon,” he said.

Among the schools recruiting him, Egbuka named Clemson, Alabama, Ohio State, Stanford and Washington as some of those showing the most interest at this point in the process.

Egbuka doesn’t believe distance will be a factor in his decision, but rather he is looking more closely at the “education, atmosphere and opportunity” when he evaluates his college options.

Asked where the Tigers stand in the race right now, Egbuka told TCI that he “can definitely say they’ll be in it.”

In other words, they have staying power as a contender for his services following the offer and visit.

“They have a good track record of strong continuity with the coaches,” said Egbuka when asked what stands out most to him about Clemson. “They all stick around, and they produce a lot of wide receiver draft picks. So, that’s always exciting.”

Egbuka is rated as a five-star prospect per the 247Sports composite, while Rivals ranks him as the No. 1 wide receiver in the class of 2021. He is considered a top-10 national prospect by both services.