Rudolph continues to impress in camp

Rudolph continues to impress in camp

Venables says 5 of his defensive ends are co-starters

Defensive end Logan Rudolph continues to have a great camp for defending national champion Clemson. And to anyone who knows the 6-foot-2, 249-pound defensive end, that’s no surprise.

Rudolph is of the Ben Boulware model of being a football player. His motor is running hard all the time. He never slows down and he never quits.

“Fifty-four (Rudolph) has shown up. Logan just plays fast,” Clemson defensive coordinator Brent Venables said. “He is whatever, (249) pounds, but plays like he is 270, at every snap and everyone knows what that looks like.”

“Logan has been in the system longer, but we have a group of four or five of them that I think they are all co-starters when it is said and done. That is our expectation. That is my anticipation,” he continued. “Xavier was out there with the ones on many snaps today. So was fifty-four (Rudolph). They all took reps with that second group. We are just rotating guys.”

Venables said he has been pleased with all of his defensive ends, saying Justin Foster and K.J. Henry have shown up as well.

“K.J., man! He has really transformed his body and has really made some improvements. He has to make another step of improvement. You have to accept the challenge so you can create the change,” Clemson’s defensive coach said. “That is humbling for young people. So, when you have children, they get their feelings hurt, quick. Right?

“It is tough, but you are relentless with them. You have to do the same thing with your players. They know you love them, and you are going to challenge them and help them create the change. You’ve got to say this is my weakness and I have to change this or whatever it is I am doing wrong. Study more, play harder, play with more discipline. Play lower. Think about situational football.” 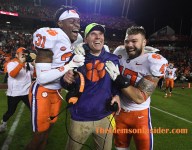