Tour of Champions: 5-star Bowman opens season with a bang

Tour of Champions: 5-star Bowman opens season with a bang

The Clemson Insider was on hand for the contest as part of our Tour of Champions and caught up with Bowman afterward. 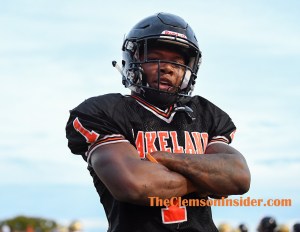 As a junior last season, Bowman rushed for 2,422 yards – averaging 11.8 per carry – and scored 36 touchdowns to help Lakeland win the 7A state championship.

One of the top-ranked recruits nationally in the 2020 class, Bowman will add another dynamic talent to the Tigers’ backfield when he joins the team next year.

Bowman — the No. 2 running back in the country according to the 247Sports Composite rankings — committed to Clemson in May over offers from Florida, Georgia, Alabama, Miami, Florida State, Michigan and Ohio State among others.

Bowman’s comfort level with co-offensive coordinator Tony Elliott and head coach Dabo Swinney was an important factor in his decision to choose the Tigers.

“Our relationship is real strong, real tight. Dabo, too,” Bowman said. “It’s just the staff, you can’t miss it – they’re building something special up there, and I’m glad to be a part of it.”

As Bowman goes through his senior season and gets ready for the next level, don’t expect him to let his five-star status get to his head – he is all about his business.