The latest big-time player running the ball for Castle and Lakeland is five-star Clemson commit Demarkcus Bowman, who rushed for two touchdowns Friday in the 2019 Kickoff Classic vs. Osceola-Kissimmee.

The Clemson Insider attended the contest at Lakeland’s Bryant Stadium as part of our Tour of Champions and caught up with Castle afterward about his star running back.

“We’ve had a lot of good tailbacks here,” he said. “But Demarkcus, he’s special, and we just want him to get a little bit better each week.”

Bowman — the No. 2-ranked running back in the 2020 class — recorded 2,422 rushing yards and 36 touchdowns last season as a junior to help Lakeland win the 7A state championship.

What makes Bowman (5-11, 190) unique is his ability to not only run by guys, but run over them, while he is an asset in the passing game to boot. 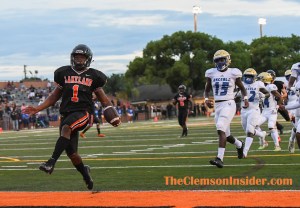 “He’s got the breakaway speed, but he has the power to go with it,” Castle said. “He’s just a solid football player. He really has good hands. We don’t utilize him too much out of the backfield, but he’s got good hands and he’s a versatile back. Can do a lot of stuff.”

Some players have a knack for taking their game to another level on the biggest stages, and Bowman has proven to be one of those primetime performers.

That was especially evident in the state title game last season when Bowman ran for 222 yards and a touchdown in Lakeland’s 33-20 win over powerhouse St. Thomas Aquinas (Fort Lauderdale, Fla.).

“There’s no doubt about it – any time you play against competition, some athletes, it brings out the best in him,” Castle said. “Demarkcus is one of those. He proved that last year in the state championship game against St. Thomas. The tougher the team, he seems to step it up a notch.”

Off the field, Bowman simply goes about his business, and Castle knows he will be a great addition to Clemson’s backfield starting next season.

“Demarkcus, he’s a good kid,” Castle said. “He’s never in any kind of trouble at school and gets his work (done). He’s going to make a good player for Clemson.”

Bowman committed to Clemson in May, choosing Dabo Swinney’s program over offers from Florida, Georgia, Alabama, Miami, Florida State, Michigan and Ohio State among others. He is the No. 2 prospect from Florida, No. 2 running back nationally and No. 17 overall player in the 2020 class according to the 247Sports Composite rankings.