TCI exclusive: E.J. Williams’ mom would be ‘dadgum happy’ to see her son at Clemson

TCI exclusive: E.J. Williams’ mom would be ‘dadgum happy’ to see her son at Clemson

MONTGOMERY, Ala. — It is a special day for E.J. Williams and his family, as the four-star wide receiver from Phenix City (Ala.) Central will reveal his college choice during a commitment ceremony at 2 p.m. eastern time.

The Clemson Insider’s Tour of Champions traveled to Montgomery on Friday to see Williams and Central High School play Hoover (Ala.) High in the 2019 Kickoff Classic at the Cramton Bowl.

While there, we spoke exclusively with Williams’ mother, Vontrelle Williams, ahead of the big announcement.

“I am so excited,” she said. “It’s been a long process. It’s sometimes stressful, but I think he handled it very well. I’ve just been along for the ride. I’m very proud of him.”

There has been no shortage of phone calls, text messages and mail sent to E.J. over the course of his recruiting process. So, he is more than ready to get his commitment out of the way, fully focus on his senior season and put all the college attention in the rearview mirror ahead of January enrollment at his school of choice.

“He says he wants to concentrate on the season and graduating because he graduates early,” Vontrelle said. “So, he just can’t wait.”

E.J. has narrowed down his list of two dozen scholarship offers to four finalists: Clemson, Alabama, Auburn and LSU.

Vontrelle has let her son know she will completely support his decision, whichever school he decides to attend.

“I would be comfortable with whatever E.J. decides,” she said. “It’s his decision, and if it was Clemson, I would definitely be dadgum happy about it.”

E.J. and Vontrelle visited a lot of different schools, some multiple times each, during the recruiting process. Clemson is one of those, and Vontrelle estimates she has been there with E.J. six or seven times on various occasions for games, a junior day, etc.

When it comes to Clemson, one aspect of the program made a particularly strong impression on E.J., according to Vontrelle. 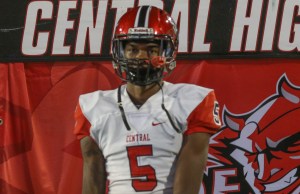 “I think the family atmosphere, really,” she said. “Knowing that aside from football, they really actually care about him and what he is trying to be as a young man as well as developing him as a player.

“So, Clemson, when I first went there, it was different. I’m telling you, it’s a different feeling. You cannot explain it to anyone else. I would just say you have to go there. With Coach Swinney, he is that person – like that person you see on TV — but when you actually get to meet him, he’s even better.”

“Justyn and Ray, they’ve basically been there as his brother,” Vontrelle said. “They’re just really close. When Justyn was here, he really took E.J. up under his wing and really showed him and taught him being the wide receiver that he is. So, Justyn is a great, great guy, and Ray. E.J. and Ray are very close also. I swear, when they come home, that’s where he is.

“So, the relationship, I can’t even explain how it feels to have those guys there for him, especially for his process. Of course they want him to be there, but not really putting on that pressure for him to go to Clemson.”

E.J.’s topflight talent on the football field has made him a sought-after recruit. But he is also a great young man off the field, and nobody knows that better than Vontrelle.

“He’s actually pretty quiet,” she said. “He stays to himself. He has his friends. Really sweet, really just nice… If he sees someone off the street, E.J. will be like, ‘Mom, give me some money,’ and he’ll give that person some money or whatever. … I’m just really proud of who he is as a person.”

As E.J. evaluated his lengthy list of college options and worked toward a decision, one factor was especially important to him.

“I think the atmosphere for him, number one,” Vontrelle said. “For it to feel like home and he’s comfortable and he would want to stay there for those three or four years. You can’t be at a place if you don’t want to be there. But you have to want to be there. You have to want to develop as a person, first, and then a player. So, I think that would be his biggest thing.”

There is a very special reason E.J. chose to announce his decision on Aug. 24 — it is the date that his late father passed away, and E.J. wanted to honor him.

So, for E.J., his mother and his family, today is not just about football and letting the world know where he will play at the next level. It is much more meaningful than that.

“It’s very bittersweet,” Vontrelle said. “I wish that his dad could be here for this process. It would be totally different, but he’s not. But I know that he’s looking down and he’s so proud of him. E.J. told me that he wanted it to mean more than just the day his dad died. So, that’s why he picked this day. He wanted to remember that he made this decision and he did it thinking about his dad.

TCI will be at Williams’ announcement today. Stay tuned to TCI for all the latest and coverage from the 4-star’s commitment announcement.