Etienne, Tigers run all over Jackets in season-opening rout

Etienne, Tigers run all over Jackets in season-opening rout

Most of the preseason hype surrounding No. 1 Clemson entering the 2019 season centered on quarterback Trevor Lawrence, and for good reason.

But it was junior running back Travis Etienne that stole the show in the Tigers’ season-opening, 52-14 victory over Georgia Tech on Thursday night at Death Valley.

Etienne started the campaign with an exclamation point and made an early Heisman statement, rushing for a career-high 205 yards on 12 carries (17.1 average) and tying a career high with three rushing touchdowns.

Etienne’s huge performance moved him into the top 10 in Clemson history for career rushing yards, while his third touchdown of the game marked the 40th of his career, making him one of only four players in school history to reach that mark (C.J. Spiller, Travis Zachery and James Davis).

Clemson totaled 632 yards of offense, including 411 yards on the ground, with backup running back Lyn-J Dixon adding a touchdown run in the third quarter.

Georgia Tech helped Clemson’s cause with four turnovers, including two fumbles lost and a pair of interceptions. Defensively, the Tigers held the Yellow Jackets to 294 total yards.

Clemson began the game with a three-and-out on its opening drive, but a muffed punt by Tech’s Juanyeh Thomas was recovered by Baylon Spector at Tech’s 16-yard line. Five plays later, Lawrence scampered into the end zone from 6 yards out to give the Tigers a 7-0 edge at the 11:52 mark of the first quarter.

On Clemson’s next possession, Tech’s Thomas forced Etienne to fumble, and the ball was recovered by the Jackets’ Justice Dingle at Clemson’s 41-yard line. 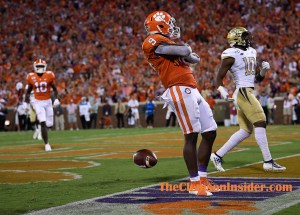 However, following a defensive stop by Clemson, Etienne more than made up for his miscue, taking a delayed handoff 90 yards for a touchdown that extended the Tigers’ lead to 14-0 with 5:39 to play in the first quarter. It tied the longest run in school history, matching 90-yard runs by Banks McFadden (1939 vs. Presbyterian) and Buck George (1951 at Furman).

Georgia Tech fumbled again early in the second quarter, this time on a bad handoff exchange. Freshman running back Jamious Griffin lost the ball, which was jumped on by Xavier Kelly at the Tech 14-yard line.

One play later, Etienne found the end zone from 14 yards out to push Clemson’s lead to 21-0 with 12:45 to play in the opening half.

Midway through the second quarter, a pass from Lawrence was picked off by Tre Swilling and returned to Clemson’s 2-yard line. But the Tiger defense did not budge at the goal line, coming up with a big defensive stand capped by a Denzel Johnson interception of Tech quarterback Tobias Oliver.

Lawrence quickly atoned for his error, completing a 62-yard deep ball to Higgins to end a five-play, 94-yard drive and provide the 28-0 halftime margin. The first half ended on Lawrence’s second interception that was recorded by Kaleb Oliver.

Etienne picked up right where he left off in the first half, breaking off a 48-yard touchdown run on Clemson’s first possession of the third quarter for a 35-0 lead at the 12:42 mark.

The Tigers continued to pour it on in the fourth quarter, with backup quarterback Chase Brice finding freshman receiver Frank Ladson for the latter’s first career touchdown, a 21-yard reception that put the Tigers ahead 49-7 with 14:54 left in the game.

Clemson will return to Death Valley on Saturday, Sept. 7, for a marquee showdown with Texas A&M at 3:30 p.m.