Clemson has only offered a couple of quarterbacks in the class of 2021, and both are currently committed elsewhere. So, the Tigers are looking at other prospects at the position in the next cycle.

The 6-foot-3, 205-pound junior was among the recruits that attended the Tigers’ game against Texas A&M last Saturday.

Gauthier enjoyed experiencing a game atmosphere in Death Valley for the first time, as well as the opportunity to continue building a relationship with quarterbacks coach Brandon Streeter. 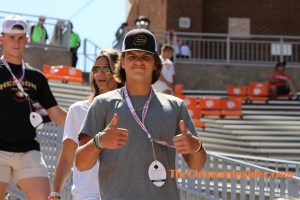 “It was awesome,” Gauthier said of the visit. “I was able to spend about one hour with Coach Streeter before the game in his office. Also, I was taken off the sidelines during pregame into the locker room before the game, and then was taken to the top of the hill to watch the players and Dabo run down the hill. I went into the locker room after. Great day. Plus, Clemson won.”

The Tigers are still in the process of evaluating Gauthier for a potential offer. Streeter let Gauthier know that he plans to watch him play in person next month.

“He talked to me about him coming to my game on October 11th,” Gauthier said. “We talked about their QB game preparation. He discussed his high interest in me. He talked to my sister Kaitlyn about her plans after college. Just all around a great conversation, and we watched a couple college games on TV in his office.”

Gauthier liked what he saw while watching Clemson’s offense in action up close during the 24-10 win over the Aggies.

“I run basically the same offense,” he said. “I think my skillset fits perfectly into that offense. RPO (run-pass option) reads, ball out quick, deep throws, a lot of pre-snap reads.”

Last season as a sophomore, Gauthier passed for 2,185 yards and 21 touchdowns en route to first-team all-region honors. In his most recent game on Aug. 30, he completed 20 of 26 passes for 248 yards and two touchdowns and also rushed for 51 yards on six carries.

“An offer from Clemson would be a great privilege and honor,” Gauthier said. “As with every offer I have received. I will sit down with my family and my head coach Jeff Saturday and OC Coach John Russ and discuss all options.”