A Clemson legacy prospect to keep an eye on for the future returned to campus for an unofficial visit a couple of weekends ago.

“The visit was a great experience,” Fields told The Clemson Insider. “I enjoyed the hospitality shown towards the recruits and the game was very entertaining.”

Before the A&M game, Jackson was able to tour the football facility and talk with co-offensive coordinator and receivers coach Jeff Scott. 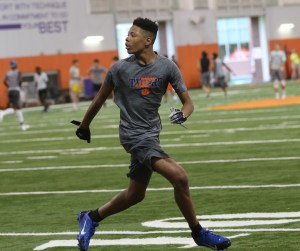 Jackson had a chance to work out with Scott when he camped at Clemson in June.

“We just talked about how I grew in height and that he likes the height that I am at right now which is 6-5,” Jackson said. “I just need to get some more bulk. We also talked about my football season and how we are doing so far. Furthermore, I like Coach Scott. He gave me great instructions while I was at camp, and he tells me to do good in school.”

Jackson is a relatively under-the-radar recruit, in part because he transferred to Elkins this year from The Kinkaid School, a private school in Houston, but he figures to garner increased college attention as he gains more exposure on a better athletic platform at Elkins.

What has Jackson heard from his father about Clemson?

“That the school is great,” he said, “and in order for me to get to the next level I am going to have to work hard and perfect my craft.”

Jackson has a lot of football left to play in high school, but he is already thinking about the next level and would love to have the opportunity to eventually follow in his father’s footsteps as a Tiger.

“It would be great and exciting knowing that I could have the chance to continue his legacy,” Jackson said.