A standout prospect from Virginia drawing interest from plenty of big-time programs, including Clemson, is set to visit Death Valley this weekend.

Henderson was previously on campus to participate in the Dabo Swinney Camp this past summer after attending the Orange & White spring game in April. The 6-foot-3, 230-pound junior told The Clemson Insider he is “extremely excited” for his return to Death Valley.

“The atmosphere at the spring game was amazing so I know this will be even better,” Henderson said. “I love the Clemson fans.” 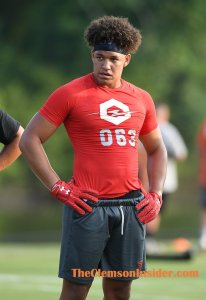 The Tigers have also been staying in touch with Henderson.

“They just check up on me weekly and send me pictures and videos every few days,” he said.

Henderson has already made a pair of game-day visits this season and has some more in the works.

“I went to Ohio State and Georgia,” he said. “I’ve got a couple more such as Maryland, Wake Forest, and a couple others are in the talks.”

Henderson doesn’t have a concrete time frame for his decision, but rather is doing his due diligence with the recruiting process and waiting for all his options to shake out.

“Not exactly sure,” he said when asked about commitment timing. “Just being patient right now, possibly spring though.”

Heading into last week, Henderson had tallied three sacks on the young season. Here are his highlights from his most recent game, a 35-0 win against Tallwood (Virginia Beach), on Sept. 13 when he recorded an interception and also tipped a pass that resulted in another interception for his team: