The 6-foot-4, 315-pound junior possesses uncommon quickness and athleticism for his size and has a high football IQ to go with his physical gifts — reasons he is ranked as the No. 1 defensive tackle in the country for the class of 2021.

The Clemson Insider traveled to Dudley High last Friday night to watch Page play against South Iredell (Statesville, N.C.) as part of our Tour of Champions and spoke with Davis about his five-star player after the game.

“He’s definitely got the mentality on the field,” Davis said. “Great football player. I think the sky’s the limit for him. He’s a kid with a lot of ability. He’s big, he’s fast for his size, and he’s strong and got great football smarts.”

Off the field, Page has a lighthearted personality and likes to goof around according to Davis.

“He’s just a big kid – laughing, playing around all the time, joking… and he loves to eat,” Davis said with a smile.

Davis is accustomed to coaching high-profile prospects at Dudley and does his best to help guys like Page stay focused and not let the hype around them become a distraction.

“Just continue to work hard,” Davis said of his message to Page. “Stay humble, continue to work hard and the rest will work itself out because football’s not a problem for him. He’s just got to make sure he stays humble, listens to the right people and let the process take care of itself.” 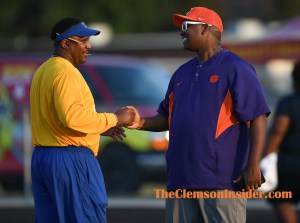 Davis has developed a good relationship with Bates and Clemson’s staff through the recruiting process and goes way back with offensive line coach Robbie Caldwell, who has ties to the Tar Heel State from his days as an assistant at both NC State and North Carolina.

“We’re both from South Carolina, so I’ve known him a long time since he was at NC State,” Davis said. “But [the Clemson staff is] great. We had a chance to go down there, work a camp a few years back, and I just met Coach Bates last year. But the rest of the guys who come up here … good guys.”