Stellato (6-1, 175) has landed a slew of big-time scholarship offers over the last few weeks. Ohio State opened the floodgates with an offer on Sept. 15, and since then, the speedy class of 2021 prospect has added offers from Alabama, Georgia, LSU, Florida, Penn State, Miami, Southern Cal and Oregon among others.

The Clemson Insider recently spoke with Stellato, who says the flurry of interest and attention he has gotten from major programs since the start of his junior season is a “surreal feeling.”

“It’s truly a blessing, something I’ve worked very hard for since I was a little kid,” he said. “I’m still not done of course. I still have so much more to work on and so much more to accomplish. I’m far from satisfied, but it’s a great feeling just having all these options, having all these schools wanting me and everything. It’s a really good feeling and I’m super blessed to be in this position that I’m in.”

The defending national champions are intrigued by Stellato’s talent and potential as a wideout as well.

“He told me he’s coming,” Stellato said. “He’s going to be at my game Friday, so I’m really looking forward to showing out for him and hopefully earning that offer from Clemson – that’d be huge if I could have it.”

“It’s very flattering that Clemson — out of all the schools that he could be going to — he’s going to be coming down to my game and watching me play on Friday night,” Stellato continued. “So, I just can’t wait to show out for him.” 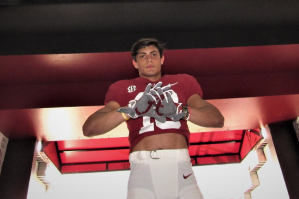 In five games this season, Stellato has racked up 19 receptions for 349 yards and three touchdowns. As a sophomore last season, he recorded 44 catches for 706 yards and five scores.

Stellato believes his speed is the number one aspect of his game that has caught the attention of college coaches, along with his sure-handedness and ball skills.

Stellato attended Alabama’s game vs. Ole Miss last weekend. He plans to visit Ohio State for its matchup with Michigan State on Saturday, while he is looking to check out some other schools this season as well.

According to Stellato, he has no timetable for his commitment and wants to do his due diligence with the process by exploring all of his options before advancing his recruitment.

“I’m kind of just playing it by ear,” he said. “I’m just focusing on winning another state championship with my team right now, and then after the season I’m going to really look more into it with me and my family.

“I haven’t really had too much time to really look at every school and take consideration, because there’s so many different aspects that go into a school that you have to look at.”

Should the reigning champs decide to offer Stellato, he says it would be “a dream come true.”

“Clemson is one of the best teams in the country each and every year,” he said. “Coach Scott was telling me they really don’t offer a lot of wide receivers, like five or six in my class, and it’s truly a blessing if I could be one of those receivers. It would really signify how much I work at this and how much I put into my game, and it would mean the world to me if Clemson offered. It’s a big-time school that’s always been very high on my list.”