Can you imagine Dabo Swinney wearing a Notre Dame T-shirt? Well, it happened.

It happened in the spring of 2018 when the Irish’s softball team played in the ACC Tournament at Georgia Tech’s Clements Mewborn Field in Atlanta. Clemson’s head football coach even spoke to the Notre Dame team before they beat Boston College in the tournament’s quarterfinal round.

Why was Swinney wearing Notre Dame gear and speaking to the Irish’s softball team? It is a simple explanation. He was watching his goddaughter, Mary Kathryn “MK” Bonamy, play.

“That is the only time I got to see her play in college, other than when we saw her on TV and all of that stuff,” Swinney said to The Clemson Insider.

Swinney will get the chance to see Bonamy play a lot this year, and he will get to wear his Clemson gear this time around.

Bonamy, a graduate student, transferred to Clemson this past summer after earning her degree at Notre Dame in business management. She will be an infielder for the Tigers’ first softball team this coming spring.

“It is just so exciting. She is getting a chance to be a part of something special,” Swinney said. “Like I told her, ‘There are going to be a bunch of teams over the years, but there is only one that ever is going to be the number one team. It is a pretty neat experience for her.” 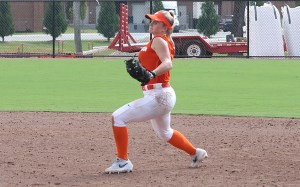 MK Bonamy, a graduate student from Hoover, Alabama, started in all 55 games for Notre Dame last year. She hit .310 with 8 doubles and 6 home runs.

It’s an experience Bonamy knew was meant to be after she injured her wrist and knee during her sophomore season with the Irish. When she found out she was going to be eligible for a medical redshirt, it happened to be the same week Clemson announced it was going to start a softball program in 2020.

“Things just happen, and they fall into place like that,” Bonamy said.

Bonamy grew up a Clemson fan, though her dad, David, went to Alabama and was a walk-on wide receiver for the Crimson Tide. That’s how Swinney met her father and that is how she became his goddaughter.

“He has been one of my two or three best friends since 1989. So, thirty years,” Clemson’s head football coach said. “We played ball together, lockered together, roomed together. We were in each other’s weddings. We have been family it seems like forever.

“I was there when MK was born, and I have been her godfather for a long time. She is a sweet girl and comes from an awesome family. She is a great softball player. Obviously, we did not have softball (at Clemson) and it is amazing how it worked out.”

Bonamy says all she knows is that she has been a Clemson fan all of her life. She admitted she always wanted to come to Clemson, but of course her softball career led her to South Bend where she started the last two years in the infield for the Irish.

The graduate student from Hoover, Alabama, started in all 55 games for Notre Dame last year. She hit .310 with 8 doubles and 6 home runs. She ranked third for the Irish in RBIs with 44 and recorded a fielding percentage of 0.989. In 2018, she started all 57 games at first base, while hitting a team-high 5 hits with the bases loaded.

“I have always wanted to come to Clemson and be around Clemson,” Bonamy said. “Being around, basically, my second family and being a lot closer to home. My parents can just drive right over. It is pretty nice.

Bonamy entered her name into the transfer portal and then spoke with Clemson head softball coach John Rittman. She then, of course, spoke with her godfather. Though she wanted to come to Clemson, she knew this was a first-year program. She wanted to make sure she was making the best decision for herself. 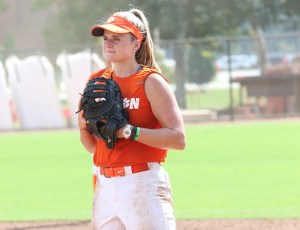 MK Bonamy was just six years old when Dabo Swinney came to Clemson as Tommy Bowden’s wide receivers’ coach back in 2003. She has been a Clemson fan ever since.

Bonamy was just six years old when Dabo Swinney came to Clemson as Tommy Bowden’s wide receivers’ coach back in 2003. Ever since then, her family has come up to Clemson for at least two or three games a year and have joined the Swinneys at every bowl or championship game.

“I am Clemson fan through and through,” she said.

The Swinneys really are Bonamy’s second family. She says she calls Will, Drew and Clay Swinney her cousins because her dad and Dabo Swinney are more like brothers than they are friends.

Even though her dad played for Alabama, Bonamy says her loyalty is to Clemson.

“They have been to way more Clemson games,” Swinney said. “Her whole life she has been coming to Clemson. They have come to all the bowl games, the championship games and they usually come to two or three home games a year. They have done that her whole life.

“So, David has always been like a brother to me. We are just really close. We vacation together every year, and always have. We have always spent a couple of weeks in Florida together every summer, as a family. We just always have, literally, her whole entire life.”

Getting to play softball at Clemson with her final year of eligibility was just the icing on the cake for Bonamy, who had thoughts of going to graduate school at Clemson whether it had a softball program or not.

“I had the last say in it, but (Swinney) was like ‘M.K, you are going to get to be around us.’ They haven’t been able to see me play a lot of softball,” she said. “The three boys, we call each other cousins. I get to watch them play every game and I get to be around them all the time, which is also nice because they are literally my second family.

“So, there was that aspect of it. But me playing softball here, I want to say it was my decision, but knowing I am going to have my other family here helped.”

Swinney is thrilled he gets to see his goddaughter play for the Tigers across the moat from the Allen Reeves Football Complex. He says he plans to be at every game and this time he will be wearing a Clemson T-shirt.