Clemson holds commitments from a couple of offensive linemen in the 2021 class but continues to evaluate a number of other O-line prospects as it looks to take one or possibly even two more in the class.

One of those on the Tigers’ radar is Noah Josey, a 6-foot-5, 300-pound guard from Brentwood (Tenn.) Academy.

Josey attended Clemson’s 24-10 win over Texas A&M on Sept. 7 at Memorial Stadium as an unofficial visitor.

“The visit went great,” he said. “It was awesome to experience a game day in Death Valley.” 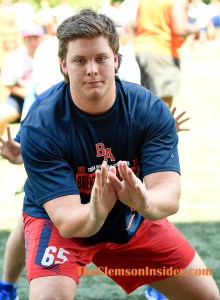 Josey worked out with offensive line coach Robbie Caldwell at the Dabo Swinney Camp in June and was able to catch up with Caldwell while on campus last month.

“I did get to talk to Coach Caldwell a good amount,” he said. “He said I’ve been doing well (this season) and he likes what he is seeing.”

Josey doesn’t have a specific commitment date in mind but hopes to see the Tigers join his offer list before he makes his decision.

“I don’t really have a timeline but I would like to be done with the recruiting process by the summer going into my senior year,” he said. “I love Clemson, and I would love the offer.”

Josey has visited Ohio State, Kentucky and Michigan so far this season. He plans to be at Alabama for its game against Tennessee on Oct. 19 and LSU on Nov. 9.