Tigers are where they always want to be, dominating the ACC

Tigers are where they always want to be, dominating the ACC

Before Florida State joined the Atlantic Coast Conference in 1992, Clemson owned the league.

Then came 1992, led by future Heisman Trophy winner Charlie Ward, the Seminoles knocked Clemson off its perch by winning the league in their first year. But that was just the beginning.

Over the next nine seasons, FSU dominated the ACC like no one else ever has, by winning or sharing the conference crown for nine straight years. They won 29 straight games against ACC foes from 1992-’95, and then 18 straight from 1995-’98 and finally 24 straight from 1998-2001.

The rest of the ACC, including Clemson, finally started catching if with the Seminoles after that and things evened out a little bit. The FSU Dynasty was the most dominant in ACC history and no one ever thought they would see anything ever come close to it again.

But being the league’s standard for so many years before Florida State, it was just a matter of time before Clemson had its moment in the sun again.

It took 20 years for Clemson to get back on top in the ACC, but since 2011, they have gone on a run that can rival what the Seminoles did, especially in the last four-plus seasons.

Since 2015, the Tigers have won a record four straight outright ACC Championships. They won 15 straight games against ACC foes from 2015-’16 and currently own a 16-game winning streak heading into Saturday’s 3:30 p.m., kick against the ‘Noles at Death Valley.

Clemson is 37-2 against ACC competition since the start of the 2015 season. A lot of people are starting to compare the Tigers’ current run in the league to that of Florida State’s from 1992-2000.

Swinney admits from a consistency standpoint both squads are similar, but not totally. From 1987-2000, FSU teams won at least 10 games for 14 straight years and finished in the top 5 every year. Both are still NCAA records.

“We are a long way from that, but we have been pretty consistent from that standpoint,” Swinney said. “But when you look at it, my ten years, Georgia Tech beat us my first year in 2009, so we have played for (the ACC Championship) six times and Florida State has played for it four in the last ten years and won it, either team, with the exception of Georgia Tech in that first year.

“But they’re Florida State. They are a great program.”

And so is Clemson’s, who once again owns the ACC. At least for right now. 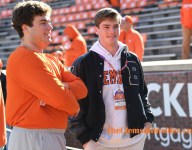