Tour of Champions: Friday was a day Parks will never forget

Tour of Champions: Friday was a day Parks will never forget

The Clemson Insider traveled to Frederick Douglass as part of our Tour of Champions and spoke with Parks about the prestigious honor following the pep rally Friday afternoon.

“It’s a huge day for me,” he said. “I’ll remember this for the rest of my life, getting in front of everybody and getting my jersey. Because one, it’s such a rare opportunity … So, being selected for a game like this, I’ll definitely remember this forever.” 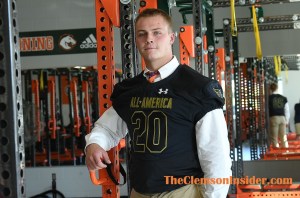 The game will be broadcast on ESPN2, and Parks is looking forward to facing off against other elite talents on a national stage.

“I’m very excited,” he said. “I’ve had a couple opportunities. My last one was at The Opening (Finals in July), then I went to the (Rivals) Five-star Challenge back in the summertime. So, it’s been a while since I’ve been able to go up against some other nationally ranked guys, but I’m looking forward to it … When I get there, I want to have a dominant performance and really showcase everything and be ready for that.”

Clemson offensive line coach Robbie Caldwell recently reached out to Parks to congratulate him on the UA All-America recognition.

Parks will enroll at Clemson next summer.

“I talk to Coach Caldwell all the time,” Parks said. “We call about once a week, just talk about whatever’s going on, really. It’s not even always about football – it’s just keeping in touch and everything. So, I talk to him, and he congratulated me the other day on this ceremony that was going to happen because I told him.”