Ross: ‘We’re Wide Receiver U for a reason’

Ross: ‘We’re Wide Receiver U for a reason’

LOUISVILLE, Ky. — While Trevor Lawrence wasn’t at his best on Saturday, when he threw a pair of first-quarter interceptions against Louisville, Clemson’s wide receivers did their part to help the star quarterback out and pick him up when things weren’t going well for him and the offense.

Eight different wideouts recorded at least one reception, and three of those receivers caught a touchdown pass, during the Tigers’ 45-10 victory over the Cardinals at Cardinal Stadium.

“We’re Wide Receiver U for a reason,” said Justyn Ross, who led the receiving corps with five catches for 55 yards and a touchdown. “We got depth, we’re going to roll everybody and everybody’s going to eat.”

Ross provided one of the best highlights of the day with his 25-yard touchdown catch, which came at a critical time late in the first half. 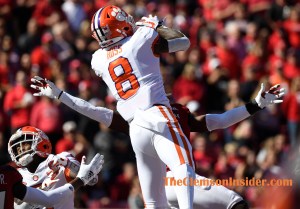 With Clemson only leading 10-3, Lawrence rolled out of the pocket and chucked the ball into the end zone for Ross, who made an impressive leaping snag with 5 seconds left in the second quarter to give the Tigers a two-touchdown lead going into the locker room.

“It wasn’t the designed play, but Trevor was scrambling and I just had to find an open spot and he put it up there for nobody but me,” Ross said.

Joseph Ngata and Cornell Powell also hauled in touchdown passes from Lawrence, who completed just 3-of-7 passes for 9 yards in the first quarter before finding his rhythm and finishing the game 20-of-29 for 233 yards with the three touchdowns and two picks.

Some of the leaders of the offense like Ross did not point fingers or become discouraged when the Tigers got off to a shaky start offensively, but rather were there to encourage Lawrence.

“You’ve always got to go to your quarterback and pick him up and let him know that we’ve got a lot more game to go,” Ross said. “But Trevor, he’s never a person just to get down. He always moves on to the next play.”

Through the first seven games of the season, Ross has tallied 28 receptions for 334 yards and four touchdowns.

The former five-star prospect from Phenix City, Alabama, had just one touchdown in the first five games before adding three scores in the last two contests against Louisville and Florida State.

“That wasn’t really my worry,” Ross said of his lack of touchdowns early in the season. “My worry was just us playing better as an offense. But now that everything’s coming back together, it feels good for everybody.”

During Pittsburgh’s media availability on Monday following its 27-17 win over Clemson on Saturday, Pitt head coach Pat Narduzzi and cornerback Damarri Mathis were outspoken when discussing the Tigers’ (…)

Xavier Thomas has message for Clemson fans after loss to Pitt