Mickens goes in-depth on his official visit to Clemson

Mickens goes in-depth on his official visit to Clemson

Clemson commitment R.J. Mickens, one of the top-ranked safeties in the country, returned to Tigertown last weekend for his official visit.

It was Mickens’ first time on campus since late July when he attended Dabo Swinney’s annual All In Cookout.

“It went great,” he told The Clemson Insider. “It was nice seeing everybody and getting back down there. It was totally a ton of fun.”

The four-star prospect from Southlake (Texas) Carroll made the trip to Clemson with his parents and siblings as well as his uncle and cousin.

“They loved it,” Mickens said. “They totally loved it.”

While on campus, Mickens did a lot, including spend time with Swinney, defensive coordinator Brent Venables and safeties coach Mickey Conn along with fellow Tiger commits DJ Uiagalelei and Fred Davis – both of whom were on their official visits as well.

He also attended Clemson’s 59-14 victory over Wofford at Death Valley and hung around with some of the current team members. 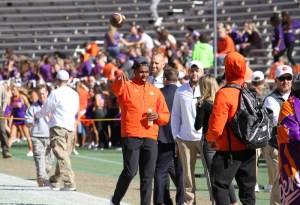 What was the highlight of the eventful two days for Mickens?

The bond between Mickens, Uiagalelei and Davis grew stronger over the weekend.

“Prior to that, I had spent a little more time with Fred,” Mickens said. “I had talked to DJ, hung out with him a couple times, but it wasn’t as much bonding time. We got to really bond and realize that we’re coming in, in 60 days. Like two more months, we’re going to be there, so it’s not that far away. They’re going to be my teammates, and it was great spending that time up there with them.”

After committing to Clemson while on campus for the spring game last April, Mickens is set to enroll early at the school in January after he signs with the program in December.

“It’s very exciting,” he said. “I can’t believe it. It’s coming quick. I’m going to miss some high school things, but I’m pretty ready for college. It’ll be great to meet those guys and be up there with them.”

While many in the media have scrutinized Clemson despite its perfect 9-0 record, Mickens is pleased with what he has seen from the defending national champs this season.

“They’re doing great things,” he said. “I know a lot of the reporters and analysts are kind of sleeping on them and being real critical and stuff just because it’s Clemson. They’re going to be real critical, especially after last year. But I honestly think we have just as good, if not better team than last year.”

Mickens is the No. 5 safety in the 2020 recruiting class according to the 247Sports Composite, which ranks him as the nation’s No. 81 overall prospect.