Damascus (Md.) defensive lineman Bryan Bresee, the nation’s top-ranked prospect, was among the double-digit Clemson commitments in the 2020 class that were on campus for their official visits this past weekend.

“It was really good,” Bresee said of his official visit.

The five-star recruit’s family had a whole lot of fun in Tigertown, too.

“They had a great time,” Bresee said. “Two of my sisters got to come. The other one couldn’t because she’s playing basketball right now, so she wasn’t able to come. But it was my other two sisters’ first time down there, so they had a really good time. My sister’s fiance also came. So, everyone who hadn’t gotten to see it before really enjoyed it, and it kind of blew their expectations out of the water.” 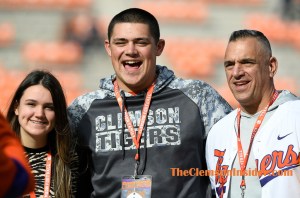 The highlight of the visit for Bresee was hanging out with his fellow commits at head coach Dabo Swinney’s house on Sunday.

“I’d probably say the last day where we all got to go over to Coach Swinney’s house and just hang out,” he said. “We were playing basketball, all ate lunch, and everyone just got to spend some good quality time together.”

Upland (Calif.) five-star linebacker Justin Flowe, one of Clemson’s select remaining targets in the 2020 class, was on campus for his official visit last weekend as well.

Bresee spent a substantial amount of time with Flowe over the weekend and has been working hard to help the Tigers recruit him.

Although Columbia (S.C.) Hammond five-star defensive end Jordan Burch did not officially visit Clemson last weekend — he was never planning to — Bresee believes the Tigers are still squarely in the mix for his services.

Burch announced on Monday that he will make his commitment Dec. 19.

“I think Coach (Todd) Bates stays in pretty good contact with him,” Bresee said, “so I think we definitely still have a good shot with him.”

Despite the lack of respect Clemson’s football team has gotten at times this year, Bresee loves the dominance the Tigers have displayed on a consistent basis throughout the season.

“I mean it’s awesome,” he said. “I think after seeing all the droppings and stuff in the rankings … That’s kind of what they have to do now to even just stay up there, they have to beat people by 50 points. So, it’s awesome to see that they’re able to do it to even a team like Wake Forest who was in the Top 25 for a while.”

Bresee, the No. 1 overall prospect in the 2020 class per the 247Sports Composite rankings, committed to Clemson in April over offers from Alabama, Georgia, Michigan, Ohio State, Penn State and many other schools.

As Bresee went through his official visit activities, the fact that he is set to enroll at Clemson in early January really started to sink in.