Johnson is going home, showing Gamecocks what they missed

Johnson is going home, showing Gamecocks what they missed

Clemson took a chance with the Columbia native, now he is not only playing but is a college graduate too

When Dabo Swinney and his family traveled to Columbia to watch his son, Will, play in a state playoff game in early November of 2014, he was not looking for any new players.

However, he could not help but notice one player from A.C. Flora High School who was making plays all over the field.

“I just remember watching the game and I was like, ‘Who is that guy? This guy is the best player on the field.’ He had an unbelievable game,” Dabo Swinney said. “I remember telling Brent (Venables), we have to find out who this guy is.”

Swinney and Venables looked him up and found out his name is Denzel Johnson, who at the time had just a few offers from a few FCS schools, but nothing from any FBS programs, including his hometown school of South Carolina.

“He had some small offers and he had some academic work to do. That is probably why a lot of schools did not recruit him because he had a little bit of work to do, academically, on where he needed to be,” Swinney said.

But the academic issues did not totally scare off Swinney, so he invited Johnson and his mother up to Clemson and gave him his options. Swinney told the state’s No. 2 safety he was not going to sign him. He knew Johnson could take the smaller offers and would have been okay with an academic redshirt season at any of those schools, or he could take a chance on himself.

“I said, ‘You can take that, or you can bet on yourself. If you will get yourself together academically and get serious about your school and get eligible between now and the summer, then I will sign you,’” Swinney recalled.

Instead of taking the easy way out, Johnson decided to bet on himself and he went to work. He did what he needed to do.

“On my official, we meet to together with (Swinney) and my family and he was very sincere and very promising about it. I could just feel it and see it in his eyes,” Johnson said.

Johnson was very motivated by Swinney’s words and knew the Tigers’ head coach meant what he said about the offer. So, he got his academics in order and Swinney kept his word and signed him in the summer of 2015, just before the start of fall camp.

On Saturday, when the third-ranked Tigers travel to Columbia to play the rival Gamecocks at Williams-Brice Stadium, Johnson will return to his hometown, not only playing for the defending national champions but as a college graduate, too.

“He has been a fun guy to watch mature and develop,” Swinney said. 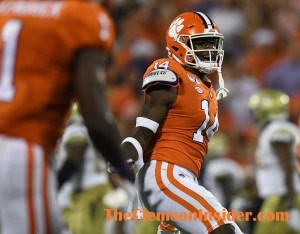 Johnson has developed into a solid player for Clemson, playing the last two years as K’Von Wallace’s backup at strong safety. He recorded 40 tackles last year and broke up three passes, while playing in all 15 games. This season he has 29 tackles, broke up one pass and picked off another.

“He is one of the most respected guys on the team,” Swinney said. “In fact, this week we had a thing about what upperclassmen are you thankful for and a lot of people said Denzel. So, he has had a heck of an impact on this team and has been a very good player.

“I think he will get a shot at the next level. I think he is athletic enough. But regardless of what happens after Clemson, he is so well prepared and has just a bright future. It’s been fun just seeing him go from a young guy that had a lot to learn about life and a lot of maturing to do, and now he is a very well-rounded, educated, articulate man that is going to be incredibly successful the rest of his life. I’m really proud of him. He is a cool story for sure.”

Swinney named Johnson as one of the four captains for Saturday’s game.

“I am really, really excited,” Johnson said. “This one kind of really stands out a little more to me. So, I am just really excited.”

Growing up in Columbia, Johnson admitted he was a South Carolina fan when the Gamecocks won five straight on the Tigers from 2009-’13. However, he never received an offer from South Carolina, but he has not let that bother him.

He is a Clemson guy now and has converted his entire family into Tiger fans.

“It is a neat story and we are really thankful to have Denzel. We are proud of him for just who he is as a person,” Swinney said. “He will be a captain this week and I know he will be excited to go play in front of the home crowd.”