As we all know, Joe Burrow, Justin Fields, Jalen Hurts and Chase Young have all been invited to New York as finalist for the Heisman Trophy.

In case you are not paying attention that is one player from LSU, one player from Oklahoma and two players from Ohio State. Yep, three of the four College Football Playoff teams are represented in the Heisman Trophy Finalist pool. The one team missing is Clemson.

Why is Clemson not represented?

There are several reasons for this. One Dabo Swinney sat his starters in most cases after the first possession of the third quarter. In one occasion, against Charlotte, he pulled most of the starters after an early second quarter touchdown, including quarterback Trevor Lawrence and running back Travis Etienne.

This is nothing new. When a game is on control, as it has been in most cases since the start of the 2017 season, Swinney will pull his starters so his younger players can gain valuable experience which generally pays off when the Tigers get to the postseason.

Once again, Clemson led the nation in the number of players played.

The second reason Lawrence or Etienne were not invited to New York was due to the fact no one was watching. Outside of the North Carolina game, a one-point victory in Chapel Hill, Clemson won 11 of its 13 games by 30 or more points. It also beat Texas A&M by 14 points but had a 21-point lead with six seconds to play when A&M called a timeout and scored on the following play.

Because the Tigers dominated their opponents, no one watched a Clemson game. The Tigers won their last seven games by an average of 42.1 points.

The final reason, and perhaps the main one, was the media’s early season criticism of Lawrence and the Clemson team.

Lawrence threw five of his eight interceptions in September, and that seemed to be difference. No one talked about what Lawrence did the last seven games of the season, or really since the start of the second quarter at Louisville.

In the last 27 quarters, Lawrence has thrown 169 passes without an interception, tying his own Clemson record during a season. He has also thrown 23 touchdowns, while completing 75.7 percent of his passes for 1,862 yards.

He has thrown at least three touchdown passes in each of the last eight games, something no one else in the country can claim, not even Heisman frontrunner Joe Burrow.

The funny thing is everyone always says, “You’re remembered for what you do in November.” And that is true when it comes to teams winning championships. However, with a lot of Heisman Trophy voters, that is not the case. They generally go by what they saw in September.

If that was not the case, Deshaun Watson would have won at least one Heisman Trophy, maybe two, and Trevor Lawrence or Travis Etienne would be in New York later this week as a finalist. 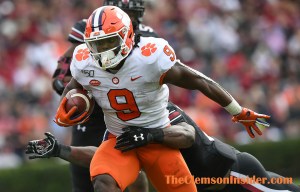 Clemson running back Travis Etienne’s 1,500 yards is tied for sixth nationally, while his 115.4 yards per game average ranks 10th in the country. (Photos by Bart Boatwright/The Clemson Insider)

Etienne has so far rushed for 1,500 yards this season, despite the fact he had just 182 carries. He had 100 or more less carries than the three running backs—Chuba Hubbard, Jonathan Taylor and J.K. Dobbins—invited as finalist for the Doak Walker Award, which goes to the nation’s best running back.

Etienne’s 1,500 yards is tied for sixth nationally, while his 115.4 yards per game average ranks 10th in the country. His 8.2 yards per carry leads the nation, while his 17 rushing touchdowns rank eighth nationally. Keep in mind, he has accomplished all of this despite carrying the football just six times all season in the fourth quarter.