A class of 2021 prospect from the Tar Heel State checked out Clemson for the first time last month and continues to attract interest from the Tigers.

Raneiria Dillworth, a 6-foot-2, 190-pound linebacker, was recently in touch with defensive coordinator Brent Venables and area recruiter Mike Reed. The coaches let Dillworth know they are planning to pay him a visit.

“Coach Reed and Venables hit me up,” Dillworth said. “They were telling me they would be to the school soon.”

Dillworth attends Glenn High School in Kernersville, North Carolina, which is located about 15 minutes from Winston-Salem, where Clemson freshman defensive end K.J. Henry is from.

Dillworth knows Henry personally and says they have a close relationship.

Dillworth visited Clemson for the Wake Forest game on Nov. 16, and while on campus, the coaches told him that he “checks off all the boxes” they are looking for in a linebacker.

As a junior this season, Dillworth racked up 174 total tackles, 22.5 tackles for loss and five sacks to go with four quarterback hurries, three fumble recoveries and an interception.

Dillworth holds offers from schools such as South Carolina, Virginia Tech, West Virginia and Indiana, while Alabama, Michigan and Penn State are other schools he has been in contact with.

When it comes to Clemson, several things stand out to Dillworth.

“Atmosphere, players, K.J. Henry and the facilities,” he said.

Dillworth added that the Tigers “would definitely fit as one of the top” contenders in his recruitment with an offer.

During the regular college football season, Dillworth made trips to North Carolina, NC State, Duke, Virginia Tech, West Virginia and Liberty along with Clemson. He is looking to visit Alabama in February and said he plans to return to Clemson soon. 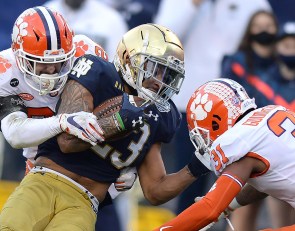