Conor Clemmons and his musical talents may be third-ranked Clemson’s best kept secret.

Clemmons, a Nashville country music artist, will land in Phoenix on Christmas Eve in advance of Saturday’s Fiesta Bowl to perform for Clemson for its Christmas party before it takes on No. 2 Ohio State in the College Football Playoff.

Clemmons’ relationship with Clemson football began in Myrtle Beach where he starred in the Carolina Opry for six years. In his spare time, he volunteered at Socastee High School and got to know former Tiger Hunter Renfrow and student assistant Cole Renfrow through their parents Tim and Suzanne who both work at the school.

Now Clemmons has a dedicated fan base in the Tigers’ football program that includes the Swinney family.

Clemmons first encountered Dabo Swinney in Myrtle Beach at the Carolina FCA Banquet a few years ago when Clemmons handled worship and Swinney served as the guest speaker. After Clemmons performed, he made a quick exit with police escort to a late performance at the Carolina Opry.

“On my way out, he took the stage and said, ‘I don’t know how y’all expect me to say anything worth listening to after that,’ and that was my first compliment from Coach Swinney,” Clemmons told The Clemson Insider. “Then years later, I’m in his kitchen being introduced as a country singer and the tradition has continued on.”

Clemmons first met Will Swinney three years ago while hanging out with Renfrow, and the two quickly became friends.

“His personality is larger than life and he’s never met a stranger, so we both just clicked, and our friendship began immediately,” Clemmons said.

Now Clemmons describes Will as one of his biggest fans and hype man. Will certainly lived up to that mantra when he talked to The Clemson Insider at the team’s Fiesta Bowl Media Day in Clemson last week. 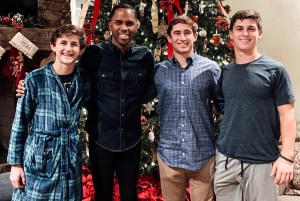 “I met him three years ago, and I invited him to the Christmas party three days later and when I found out he was a Nashville country singer I started telling everybody he could sing but he wanted me to be quiet,” Will said.

“Then my dad said, ‘let’s see what you’ve got’ and he broke out into Christmas songs with a bunch of strangers and next thing you know my dad told him he needed to sing at our team Christmas party,” he continued.

The annual “Santa on the Roof” party at the Swinney house in 2016 introduced Clemmons to the Clemson football world. He went on to sing at the team’s Christmas party that year as well and then the Tigers went on to win the national championship.

The following year Clemmons had a scheduling conflict and couldn’t make it to the team party ahead of Clemson’s Sugar Bowl loss to Alabama in 2017. But in 2018 Clemmons returned and so did the Tigers with a 44-16 national championship win over the Crimson Tide, again.

This year Clemmons is on the way to the Fiesta Bowl to spend Christmas with the Swinneys and perform at a Christmas Day breakfast for the Clemson football team.

“When I sing, I will sing for the team, but we are taking it one day at a time. Hopefully, we will come away with the win,” Clemmons said.

Will Swinney and Clemmons differ in opinion on whether Clemmons is the team’s secret weapon to win national championships. But the numbers seem to indicate a correlation.

“As high of an honor as it would be to claim to be a secret weapon, I think Coach Swinney is just really consistent,” Clemmons said. “That reflects back on him as a person, father, leader and a coach for me to have an opportunity to be a part of the Clemson football program is an honor and a blessing. I don’t want to break the tradition because it has went well so far.”

Will told The Clemson Insider he thinks Clemmons is the secret, “at least I hope so,” he said.

Coach Swinney told media members at a Nashville Prowl and Growl last year that Clemmons, along with Carrie Underwood and Lee Brice, were his favorite country singers and it’s easy to see why. Clemmons loves his Clemson family and hopes to spread some joy and happiness this Christmas season.

“My goal is to bring a little bit of happiness and joy even to just a small part of the country,” Clemmons said. “Right now, Clemson, South Carolina happens to be that little part of the world and I couldn’t be happier.”