Freshman season ‘great experience’ for Booth despite bump in the road

Freshman season ‘great experience’ for Booth despite bump in the road

It seems like only yesterday to Andrew Booth that he was back home attending Archer High School near his hometown of Dacula, Georgia.

But in reality, the former five-star cornerback is nearing the end of his true freshman season at Clemson, a campaign that has seen the Tigers go 14-0 so far, edge Ohio State in the Fiesta Bowl last Saturday and earn a spot in the Jan. 13 national championship game against LSU in New Orleans.

“It’s very cool,” Booth said to The Clemson Insider about his first year as a college football player for the defending national champions. “It’s crazy I’m actually here because it felt like a day ago I was at home still at high school. So it’s crazy, my freshman year being on this platform. It’s crazy. My freshman year, I got to experience a lot of things. I got to travel with the team, got to play in the games and stuff, so that was real cool. Battling injuries all season was the only downfall really, but it was a great experience my freshman year.”

Playing for head coach Dabo Swinney is everything Booth thought it would be when he committed to Clemson on July 30, 2018 over Auburn and many other offers from schools such as Georgia, LSU, Alabama, Ohio State, Michigan, Oklahoma and Notre Dame.

Booth, who enrolled at Clemson last summer ahead of fall camp, entered the 2019 bowl season credited with six tackles and a pass breakup in 65 defensive snaps over 13 games, during which he has played more extensively on special teams. 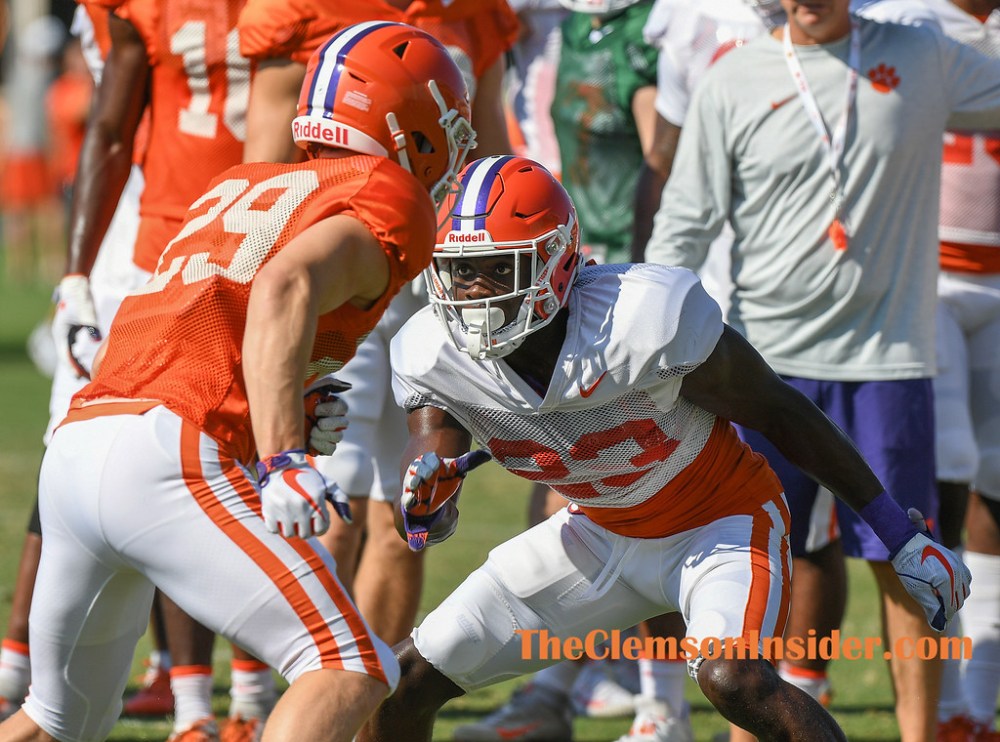 If there is one part of Booth’s game that has improved under the tutelage of cornerbacks coach Mike Reed, it’s his football IQ.

“My smarts,” he said. “In high school I wasn’t a smart player, I was just straight athleticism. So, Coach Reed is kind of embedding the knowledge into me this season, and that’s really, other than being healthy, is what I need to get better at is my knowledge for the game. That’s pretty much it.”

The one blemish of Booth’s freshman season came on Oct. 19 at Louisville, when Booth was ejected from the game after getting tangled up with a Cardinals player during a punt, slamming him to the ground and then throwing a punch.

After the game, Swinney apologized to Louisville head coach Scott Satterfield and made Booth ride the bus home from Louisville instead of fly home with the team.

“About that situation, man, I like to say man I love my teammates, I love Coach Swinney, I love all my coaches,” Booth said. “They were very supportive on that issue and they knew that wasn’t me or whatever, and it was a great learning experience. So, I can assure you it won’t happen again. I learned a lot from the issue and I’ve grown a lot from the issue.”

Booth has also endured a setback from a health standpoint, as he suffered a torn patellar tendon that will force him to undergo surgery after the national title game.

However, Booth does not expect to be sidelined for long and is eager to get healthy in the offseason so he can compete for a bigger role on Brent Venables’ defense next year.

“I get surgery that Friday after the national championship, so we’re going to go from there,” Booth said. “I’m going to rehab, get my knee strong and I’m going to mask up, just go under the burrow and just work hard.”

Clemson is going back to the national championship game after once again winning the Fiesta Bowl over Ohio State. Get your official Fiesta Bowl champs gear right here!