'Awesome' redshirt year has Maguire excited for the future

'Awesome' redshirt year has Maguire excited for the future

After his first season at Clemson, true freshman linebacker Keith Maguire can say with certainty that playing for the Tigers is everything he thought it would be when he committed to the school on April 27, 2018.

“It’s been everything I expected,” Maguire recently told The Clemson Insider. “I expected a great school, great team, great culture, and it’s been all of that. It’s been a fun year and I’m excited for the next years coming.”

Although Maguire saw minimal playing time across four games this season while redshirting, the former four-star prospect from Media, Pennsylvania, knows the redshirt year will benefit him down the road.

“Yeah, it’s been awesome,” he said. “The new rule with four games is really helpful. You’re able to really have a redshirt year, save a year of eligibility but still play in four games, which is a lot of games really at the end of the day. So, that was awesome. All four games were really helpful and allowed me to experience what it’s like on the field.”

Maguire, who enrolled at Clemson last summer, enjoys working with defensive coordinator/linebackers coach Brent Venables and has a tremendous amount of respect for him. 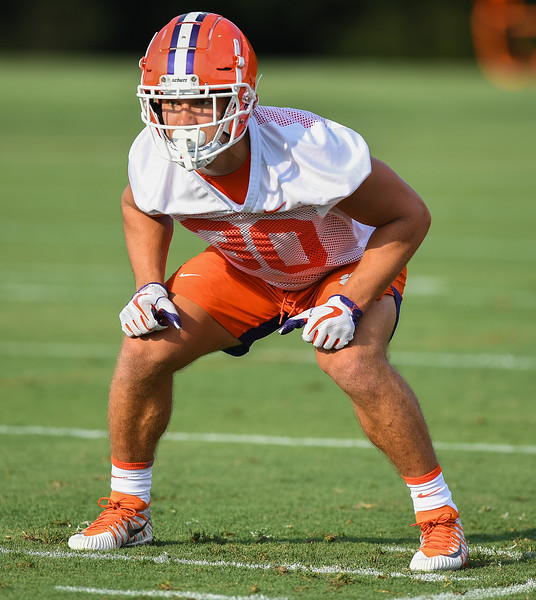 “He’s a mastermind. He’s a genius,” Maguire said. “His defense, once you learn it, you learn it, you know it. You can just tell why he’s one of the best in the business. He’s focused all the time, he’s legit and he’s one of the best defensive coaches that I know. So, it’s been an honor playing under him right now and learning, and just hopefully I continue to do that.”

Maguire loves playing for an authentic head coach in Dabo Swinney as well.

“Coach Swinney is Coach Swinney,” he said. “What you see on camera or in the press is what he’s like behind closed doors. He’s just a great guy, great coach, and he’s a coach that you’d want to play for. That’s how it is.”

The top-ranked player in the state of Pennsylvania by some services coming out of Malvern Preparatory School, Maguire made the most of the nine snaps he played in 2019, recording a couple of tackles including one for a loss and notched his first career interception in the ACC Championship Game against Virginia.

Looking ahead, Maguire says his goal is simply to do whatever he can to help the Tigers win games.

“I’m just going to work hard, stay humble, stay focused,” he said, “and just hopefully I can contribute however the team needs me to contribute.”