The Clemson Insider caught up with Briningstool about his decision to choose Clemson over offers from Alabama, Ohio State, LSU and Florida among many other schools.

“Coach Swinney has built something special,” he said. “He was telling us yesterday that Clemson football is going to have the best decade in CFB history, and I want to be a part of it.”

Briningstool (6-6, 215) has known since last month that he wanted to be a Tiger and informed Swinney of his commitment Sunday morning.

“I knew I wanted to come here after we attended a bowl practice in December,” he said. “My family and I went over to coach Swinney’s house this morning and told them, and they were all really excited.”

Briningstool said the bond he built with Swinney and Clemson’s coaching staff was a “very important” part of his decision.

“Dabo always says it’s not the place, it’s the people, and Clemson has special people and I’m happy to be a part of it,” he added.

Saturday’s visit gave Briningstool a chance to get to know the other commits in Clemson’s 2021 class.

“I haven’t been around them much besides yesterday,” he said, “but I’m super excited to start to build friendships that’ll last forever with these guys.”

Briningstool is ranked as high as the No. 53 overall prospect in the 2021 class by ESPN, which considers him the nation’s No. 1 tight end-Y.

How do the Tigers plan to utilize Briningstool as a tight end in their offense?

Not only did Briningstool fall in love with Clemson during the recruiting process, but so did his mother and his father, former Michigan State linebacker Tony Briningstool.

“They love it!” Briningstool said of his parents.

“My dad loves it. He feels like they’ll take great care of me and help better me for life in the future.” 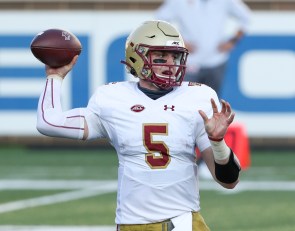 When Clemson head coach Dabo Swinney looks at Boston College, he sees a team that could easily be a 5-1 football team as opposed to the 4-2 record it will come into Death Valley with on Saturday. The Eagles (…)

Being a running back for the Clemson Tigers has always been a big deal. Clemson has produced many great running backs through the years. Two-time All-American and ACC Player of the Year Travis Etienne is the (…)

Regardless of quarterback Trevor Lawrence’s future with the Clemson football team, one thing is certain, this will be his last year playing alongside All-American running back Travis Etienne in the (…)

There is no competition for Clemson’s starting spot at the boundary wide receiver position. At least that is what head coach Dabo Swinney said following Wednesday’s practice at the Poe Indoor Practice (…)

Clemson head coach Dabo Swinney met with the media after practice Wednesday from the Poe Indoor Practice Facility in Clemson. Swinney updated the media on injuries to linebacker Mike Jones and cornerback (…)

Clemson has learned of the passing of former Head Men’s Soccer Coach Trevor Adair. He led the Clemson program for 14 seasons from 1995-2008, and is the second-winningest coach behind Dr. I. M. Ibrahim (…)

Two-Minute Drill: Giving up big plays are not acceptable to Venables

Clemson defensive coordinator Brent Venables is not satisfied with just giving up a big play here or there. He wants his team to play clean for an entire game and not give up the play like it has the last (…)

With Skalski out, what is next for Clemson at middle linebacker?

Top-ranked Clemson’s success on the field has made plenty of headlines in recent years with a pair of national championships and a historic run of dominance in the ACC. But players and others within (…)