During his time at Clemson, Dorian O’Daniel played in two national championship games and went to three College Football Playoffs. He was a part of the Tigers’ 2016 National Championship.

Playing on the biggest of stages is nothing new for the former Clemson All-American. However, he admitted to a Pittsburgh news outlet down in Miami there is something different about playing in a Super Bowl.

O’Daniel is a reserve linebacker for the Kansas City Chiefs, who, as an organization, is making its first trip to the Super Bowl in 50 years. The Chiefs will play the San Francisco 49ers Sunday in Super Bowl LIV at 6:30 p.m., in Miami.

“It’s surreal. It finally started setting in last week,” O’Daniel said to DK Pittsburgh.com. “Then getting down here. You try to call it another game, but it’s a big deal. I’ve got to treat it like such. There are a lot of guys that get to this point and don’t return. I’m taking that for what it is and enjoying it.”

O’Daniel is just one of a handful of players in Super Bowl LIV that is going for the rare double – winning a national championship in college and then a Super Bowl. Three of O’Daniel’s Kansas City teammates have that same opportunity—offensive guard Cameron Erving, linebackers Darron Lee and Reggie Ragland. Defensive end Dee Ford of the 49ers will have the opportunity on the San Francisco side.

O’Daniel is even in rare air on the Clemson side of things. No former Clemson player has won a national championship and then a Super Bowl since the 1987 football season.

O’Daniel has the opportunity to be the first player from Clemson’s most recent national championship teams to win a Super Bowl.

The 6-foot-1, 220-pound linebacker was drafted in the third round by the Chiefs in 2018. This year, he has played mostly on special teams and finished second on the squad with nine tackles.

“I really didn’t play much until my junior and senior year at Clemson. It’s all part of the process,” O’Daniel said. “I can’t compare my process to the next man’s. We’re different people and there are different things we go through. My thing is to stay the course and control what I can control, my work ethic, attitude and how I attack each day.” 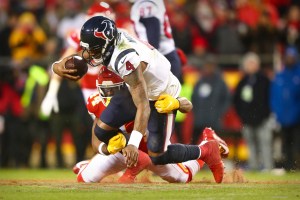 The highlight of O’Daniel’s season to this point came in Kansas City’s AFC Divisional Playoff win over Houston, when he sacked his old Clemson teammate Deshaun Watson for his first career sack.

O’Daniel knows his opportunities to play in Super Bowl LIV will likely come on kick coverage, but he plans to make the most of them.

“Obviously, it’s a little frustrating because I want to play. I want to make an impact,” he said. “But the only thing I can do is respond and make the most of my opportunities when I’m out there.”