Seven former Clemson players have been invited to the NFL Scouting Combine which will be held later this month in Indianapolis.

In all, the Tigers had three players on the offensive side get an invite and four players from the defensive side of the ball.

Clemson is coming off a 14-1 season in which it advanced to the College Football Playoff National Championship for a second straight year and for the fourth time in the last five years.

On Tuesday, ESPN’s Todd McShay released his second mock draft. McShay has two Clemson players going in the first round. He has linebacker Isaiah Simmons going No. 4 overall to the New York Giants and wide receiver Tee Higgins going No. 24 to New Orleans.

McShay says Simmons is what every NFL team dreams of having.

“He can rush the passer, he can stand up against the run and he can drop into coverage,” the ESPN analyst wrote.

With New York’s Markus Golden headed toward free agency, Simmons could fill a void with a player like Simmons.

Simmons is sure to continue wow NFL general managers and coaches at the NFL Scouting Combine later this month. It would not be surprising to see him move in the top 5 of the draft before it is all said and done.

The former Clemson linebacker is one of those guys who can do it all, He is big enough (6-4, 230) to play linebacker and fill in the run fits. He is fast enough to cover sideline to sideline and cover wide receivers in the slot or running backs out of the backfield. He is intelligent enough to play both safety positions and he moves hips well enough that he can go out wide and cover wide receivers if need be.

Simmons can even put his hands on the ground and play defensive end if a team needs him to. That’s what makes Clemson’s unanimous All-American so intriguing in this year’s draft.

He finished the 2019 season with a team-best 107 tackles. He had 16 tackles for loss, including eight sacks. Both led the Clemson team. He also tied for the team lead with 10 passes broken up and was second with three interceptions.

At season’s end, Simmons was named the ACC Defensive Player of the Year, a First-Team All-American and the winner of the Dick Butkus Award, which goes to the nation’s top linebacker. 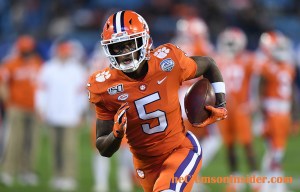 Clemson wide receiver Tee Higgins averaged a remarkable 19.8 yards per catch in 2019, which led the team. He finished his final year in a Clemson uniform catching 59 passes for 1,167 yards and 13 touchdowns. (Bart Boatwright/The Clemson Insider)

Higgins ended his Clemson career as one of the top receivers in the program’s history, catching 135 passes for 2,448 yards, while tying the school’s all-time touchdown reception mark with 27. In all, he played in 43 games with 30 starts in his three-season career.

Higgins averaged a remarkable 19.8 yards per catch in 2019, which led the team. He finished his final year in a Clemson uniform catching 59 passes for 1,167 yards and 13 touchdowns.

Terrell also has the potential to be a first-round pick and his performance in the NFL Combine might play a big role if he indeed does. A First-Team All-ACC selection, Terrell played in all 15 games this past season for Clemson, while recording 34 tackles. He also had two interceptions in helping a Clemson defense that finished fourth nationally in passing defense, third in scoring defense and sixth in total defense.

Terrell, who played a big role in the Tigers’ return to the national championship game, had six inceptions in his Clemson career, to go along with 20 PBUs.

In all, Terrell played in 44 games and started 30 of them at Clemson. The 6-1, 190-pound defensive back had a pick-six in last year’s national championship game against Alabama, which started the scoring. He also had a career-high eight tackles. Clemson went onto beat Alabama that night and claim the national championship.

Muse led a Clemson defense, which ranked third in the country in interceptions, with four picks. As a team the Tigers had 19. He was also fifth on the team with 73 tackles, including six tackles for loss. He also had two sacks and broke up five passes from his safety position.

Simpson and Anchrum, played on a line that helped Clemson average 240.4 yards per game, which ranked second in the ACC and 13th nationally. The Tigers 6.4 yards per rush led the country. Their 45 rushing touchdowns finished tied for second nationally.

With those two blocking, Clemson gave up just 1.2 sacks per game on the average, which ranked 11th nationally.