The talented 2020 signal-caller chose a preferred walk-on offer from the Tigers over a scholarship offer from South Florida and several other Division I offers.

He originally committed to Holy Cross last summer before reopening his recruitment in November.

“It’s my dream school,” Helms said of Clemson. “Ever since I can remember I’ve been going to Clemson games, and going up there – like, just the drive – it just makes me happy, like I’m going to Tigertown. But talking to the coaches these past two to three months strongly, it just really felt like the right place. It’s really hard to not take that option because I felt like I would regret it because that’s where I’ve always wanted to be. I had a chance to go there, and that’s the right place for me.”

Helms (6-2, 205) said he grew up a Clemson fan and has known for some time that he wanted to be a Tiger, though he admits he was given pause in December when new USF head coach Jeff Scott came calling with a full-ride opportunity to play for the Bulls.

In the end though, after praying and weighing his options, Helms decided to commit to Clemson following his official visit there in mid-January. 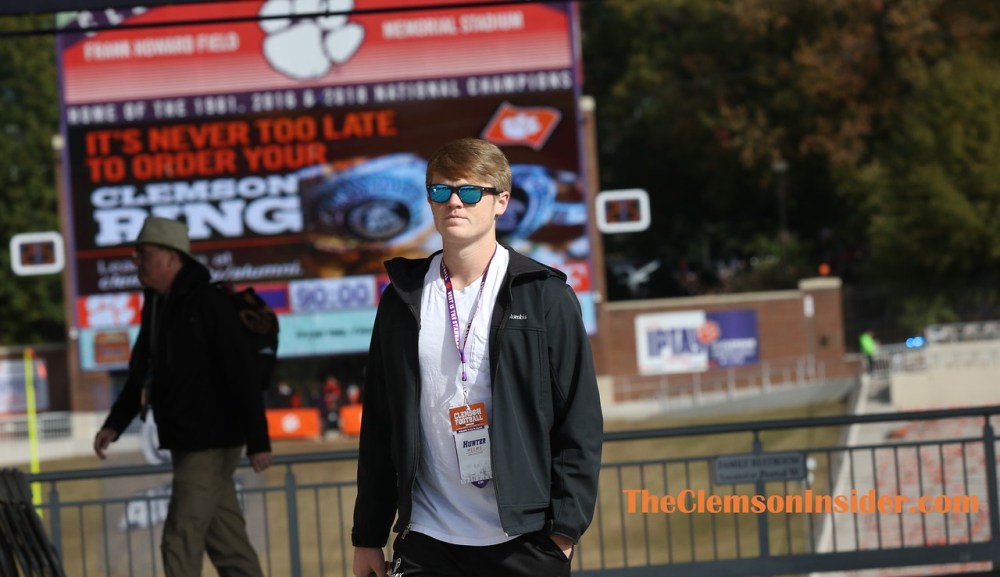 Hunter Helms in Death Valley during an unofficial visit to Clemson for the Wake Forest game November 16, 2019

“For a while I was kind of headstrong on Clemson, and Coach Scott called, and I had to do a little rethinking,” Helms said. “But my family and I prayed about it a lot, and before we started to really plan the official visit up there, I was kind of strong about where I wanted to be which was obviously Clemson.”

Helms’ father, Todd Helms, used to be a big fan of Clemson’s in-state rival but you can bet he will be cheering on his son and the Tigers now.

“He was a die-hard Carolina fan, so my family’s kind of been split,” Hunter said. “But when we went up there for my first visit – I think it was like a spring game two or three years ago maybe – and when we left, he was like, ‘Gah, no wonder they’re killing us every year,’ and I was like, ‘Yeah!’ But just the family feel… Even my mom, my dad, all of our first times there, it’s just something different. There’s nowhere in the country like it.”

Hunter has had conversations with Clemson coaches about the possibility of eventually being placed on scholarship.

“We’ve definitely talked about it,” he said. “It’s just all about earning it. You’ve got to earn everything, and I love that and I agree with that 100 percent. It’s a PWO right now and I’m completely fine with that, and I’m just blessed and honored to have the chance to go there at all. So, I’m just going to take that and run with it, and if things come to that, that’s awesome. I mean, that’s kind of one of the goals. But I’m just going to go in there and try to help the team as much as possible.”

Hunter is ready to join the program this summer and get to work.

“It was all real because ever since the official visit, I officially told them I was coming and we’ve been really excited,” he said. “But (Wednesday), signing that paper and getting all the cheers, it’s unreal, the feeling. I’m just ready to go down, I’m ready to suit up.”