Clemson’s 2020 recruiting class was already all wrapped up entering Wednesday’s National Signing Day, but head coach Dabo Swinney took the day to re-celebrate what has the potential to be one of the best groups the Tigers have signed during his tenure.

“I love this group and think they will prove to be one of the best groups we’ve had and allow us to continue to be one of the most consistent program in the country, on and off the field,” Swinney said. “Because these are a bunch of really good students that are coming in here and young people that are driven to be excellent in everything that they do.”

The Tigers signed five prospects rated as five-stars by the 247Sports Composite, tying their 2018 class for the most five-star signees. They also signed 10 top-100 national prospects per the same service, including seven top-50 signees, with both totals marking the most they have had in a single class on record.

While the recruiting networks hold Clemson’s class in high regard, Swinney has never put much stock into those rankings and pointed out that San Francisco 49ers quarterback Jimmy Garoppolo, who played in the Super Bowl, was a two-star recruit.

“Everybody wants to put rankings and all that stuff on these classes coming out of high school, which obviously that’s all based on potential, what people think they can do. And as we all know, this is a developmental game,” Swinney said. “It’s a very subjective process influenced by many, many factors, and so we try to stay focused on the things that we look for, and sometimes it matches up with what everybody thinks and sometimes it doesn’t.

“But I think at the end of the day, this is a really, really good class that I think over time will prove to be a special group. I think we all think they’re a special group right now, but over time you have to prove that, and that’s why I always say you should rank the classes four years later because then it’s truly about performance, it’s about graduation, it’s about development and all those things.”

Fifteen of Clemson’s 23 signees enrolled early in January, and Swinney is excited to have them on campus.

“They’re off to a great start,” he said. “Just a lot of fun knowing that these guys are here and will be part of spring practice. Just kind of getting everything down right now. They’re all eager, they’re learning. So, you spend all this time recruiting them and now you’re actually getting a chance to really start coaching them.”

Swinney believes many members of the historic 2020 class will be able to make an early impact for the Tigers.

“We’ve got a bunch of guys in that group that I think will have the potential to help us for sure,” he said. “So, that’s going to be a lot of fun. It’s going to create a ton of competition this spring.” 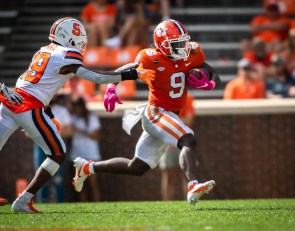 It was obvious a few times in Saturday’s Syracuse game Clemson was missing defensive tackle Tyler Davis. It was also obvious they were missing linebacker James Skalski, defensive tackle Jordan Williams and (…)

Travis Etienne blamed the cramping issues he dealt with during Clemson’s win over Syracuse on Saturday on the fact he only ate a bowl of Frosted Flakes for breakfast prior to the 12 p.m. kickoff at (…)

Top-ranked Clemson struggled to pull away against Syracuse on Saturday but eventually secured a 47-21 win to remain undefeated. Syracuse pushed within a touchdown of the Tigers with an 83-yard touchdown pass (…)

The latest Associated Press Top 25 Poll was released on Sunday. Clemson remained the No. 1 team in the country following its 47-21 victory over Syracuse on Saturday. The Tigers (6-0, 5-0 ACC) have 52 (…)

Following its 47-21 victory over Syracuse on Saturday, Clemson remained the No. 1 team in the country in the latest Amway Coaches Top 25 Poll, which was released on Sunday. The Tigers (6-0, 5-0 ACC) still (…)

Though his team played well for much of the day Saturday, Syracuse head coach Dino Babers knew his team needed to play near flawless to beat top-ranked Clemson. Of course that did not happen, as the Tigers (…)