Swinney on Uiagalelei: ‘He can do anything’

Swinney on Uiagalelei: ‘He can do anything’

Everybody knows that five-star Clemson quarterback signee DJ Uiagalelei has elite arm talent and is exceptional at throwing the football, but because he is so excellent as a passer, his athleticism and running ability can sometimes get overlooked.

Uiagalelei (6-5, 243) is considered a pro-style quarterback or pocket passer by the major recruiting services but can also be a dynamic dual-threat weapon when he wants to. Not only did he pass for 10,496 yards and 127 touchdowns in his high school career at St. John Bosco (Bellflower, Calif.), but he also rushed for 1,103 yards and 18 touchdowns while averaging 6.1 yards per carry.

Trevor Lawrence was not given a lot of credit for his ability to run the football coming out of high school but showed he can do it well last season when he had 563 rushing yards on 103 carries (5.5 yards per attempt) and scored nine touchdowns on the ground.

Clemson head coach Dabo Swinney is confident that Uiagalelei will be able to do whatever the Tigers ask of him as well, both as a passer and a runner.

“He can do anything,” Swinney said. “That’s what they said about Trevor, too, when he came in. He apparently wasn’t a guy that could run. I think that myth has gone out the window.

“DJ can do anything you want him to do. He’s fast and strong and powerful, and he’s a very, very athletic guy. So, there’s nothing that we need him to do that he can’t do.”

In fact, Swinney believes Uiagalelei is as good of a runner as any quarterback the Tigers have had, even Deshaun Watson.

“He’s right at 6-4, 240-something pounds and looks lean,” Swinney said. “He’s everything that the great ones we’ve had, just bigger. He’s not 6-6 like Trevor, but none of those guys are 240 pounds. He can run as well as anybody we’ve had. Trevor, Deshaun, both those guys can run, and he’s special with his arm and his legs like those guys.”

Uiagalelei, of course, has a cannon of an arm to go with his legs.

“First thing that you notice is how strong his arm is,” Clemson quarterbacks coach and passing game coordinator Brandon Streeter said. “I mean, it’s incredible. I don’t know if I’ve seen a guy that has quite the arm strength that he does. Obviously every time a kid comes in, you try to tweak a few things technically. So, we’ll work on that this spring a little bit. But the main thing for him is to really dive into the playbook and really learn it. Once you do that, your confidence level just gets higher and higher.”

Uiagalelei enrolled at Clemson in early January and was able to participate in a couple of the Tigers’ on-campus bowl practices ahead of the national championship game, so he is a little bit ahead of the game entering spring practice.

“He did get some reps with my drills and he did get reps after practice,” Streeter said. “We have a JV period where we have 15 or 20 minutes to work with them, so it’s really good and it was really good for DJ to see kind of the pace of our practice, how our practice works, the logistics and just kind of the expectations. And then he got to be able to see some of the procedural stuff that we do. So, it’s a really good start for him and a head start for him.” 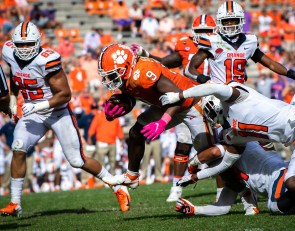