Clemson means much more to Lee Family than Monte’s job

Clemson means much more to Lee Family than Monte’s job

Eryn Lee is new coach of the Rally Cats, 2 daughters are juniors at Clemson

When Monte Lee became Clemson’s head baseball coach in the summer of 2015, he was concerned about his girls adapting to Clemson.

Before coming to Clemson, Monte was the head coach at the College of Charleston for six years. He met his wife Eryn there and built a life there with her and their four daughters – Madie, Shelby, Blaire and Alexa.

“Clemson fits me. I grew up in smaller community in South Carolina,” he said. “I was concerned about my family. My daughters lived in Charleston. It is a different life.”

Charleston is rated as one of the top cities in the world to visit and to live. With the beach, the downtown shopping, the history and all the restaurants, Charleston a thriving city where people want to be. Though people love to live and visit Clemson, obviously its not the same as Charleston.

“I was concerned about the transition when they came here. ‘Will they like it here?!’ It is a slower pace of life,” Monte said. “It is more of a community feel here. It is not what they are used to with the fast pace and so much going on with the beach, the shopping and the restaurants and all of that stuff you get in Charleston.”

Monte soon discovered there was no need to worry. His family fell in love with Clemson, becoming a part of the university and the community that would make any husband and father proud. His oldest daughter Madie moved to Clemson from Charleston a few years ago and runs a downtown restaurant. Blaire and Shelby are both juniors at Clemson and his wife, Eryn, is the new coach of the Rally Cats, Clemson’s dance team.

“I think the fun part of it is that the community really embraced us when we got here,” Eryn said. “We just love it. It is now a part of who we are, too. I think people that do not live in Clemson and have not had the wonderful opportunity to live here and get to experience the community and the family element … it is such a great place. We are all in.

“That is just how we are. Our kids go to school here, he coaches here, now I am fortunate enough to coach here, too. We will be all in as long as we can be.”

Eryn took over as the Rally Cats coach in mid-November. A dancer all of her life, Eryn coached the dance team at the College of Charleston from 2004-’11. That is where she met Monte. In her own way, she always hoped he would get the opportunity to coach the Rally Cats at Clemson, but the timing was going to have to be right.

So, when she was approached about the job coming open late last year, she spoke with her husband about it and wanted to see what he thought about the idea of her coaching again.

“When I told him, I was thinking about it, we had long discussions,” Eryn said. “He is probably one of … besides being a spouse, we bounce everything off each other in a lot of ways with business. It is kind of nice because I can have that real conversation with him, as if he is not my husband.

“He can throw out the black cat moments and say ‘what about this and how do you feel about this’ and kind of question some different things. We had a lot of long discussions about whether this was the right timing for me professionally, whether it was the right time for our family. Obviously, coaching any sport is time consuming and is a commitment and so those things were discussed.”

Luckily for Eryn, she is at a place in her professional life with Johnson & Johnson that she has enough time in the late afternoons and evenings to coach the Rally Cats. It also helps that her daughters are grown up and don’t need as much supervision as they once did. The Lees youngest child—Alexa—is a sophomore at nearby Daniel High School.

“I am really just a sounding board for her, and I just try to help guide her in the right direction if she needs my help.” Monte said smiling proudly. “Often times, she does not need my help. She loves to interact and communicate. She is doing a good job with it and I know she absolutely loves the opportunity to do it.” 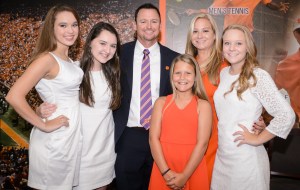 Clemson head coach Monte Lee (center), with his wife Eryn to his right and their four daughters Madie, Shelby, Alexa and Blaire. (File photo from 2015).

And Monte loves that she is coaching again.

“It was funny when I walked into his office, after they had offered me, I think he was probably more outwardly elated than I was,” Eryn said. “That was a really cool moment for me because I have been able to watch him evolve and enjoy his successes as a baseball coach and be there for him when sometimes it has not been so successful. So, it was just really fun to see him be as excited for me.

“It was not like we were going to the postseason or we won a big game. He was excited because it was a new opportunity for me. He was very, very supportive and very excited, so that was fun.”

Being the Rally Cats’ new coach is also fun because Eryn is getting the opportunity to coach her daughter, Blaire, as well. Blaire has been a Rally Cat the least two years, and like her mother, she loves to dance.

However, Eryn has made it clear to Blaire, and her team, that when they step into the gym to practice or to perform at Death Valley or Littlejohn Coliseum, the mother-daughter relationship is on hold until they leave the facility. 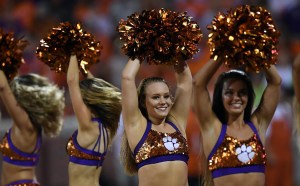 Blaire is a junior a Clemson and is a member of Clemson’s nationally famous dance team, The Rally Cats. (Top photo and photo by Bart Boatwright/The Clemson Insider)

“That mother-daughter relationship kind of stops at the door,” Eryn said. “It goes into player-coach. I was very open and up front when we started. I told the team, ‘I will address the elephant in the room.’ Blaire is another player, another athlete. She is not going to be treated any differently because she is my biological child. She is going to be treated the same, if not, probably scrutinize a little harder because I am never going to put anyone in position of preference or fairness. Everyone is equal. It is how it works.

“You earn your spot. You practice hard and you do what is right and that is how it is and if you don’t then you get the same consequences as anyone else.”

Blaire is currently in Australia working on a school internship overseas. However, when she returns for her senior year this summer, Eryn says she will have to tryout for the team like everyone else.

“She will have to earn her spot and make the team like everyone else,” the Clemson coach said.

These days, Monte enjoys seeing his wife coach again because he knows how much it means to her. He loves seeing Blaire dance with the Rally Cats. He loves that Shelby is in a sorority at Clemson. He loves that Madie has moved to Clemson and is now working professionally here and he loves that Alexa is enjoying her high school years at Daniel.

“My family absolutely loves Clemson,” Monte said. “They fell in love with Clemson as soon as we got here, and that was the thing that put my mind at ease. My family loves living here. My kids absolutely love going to school here. I have a daughter that is in a sorority and I have one that is a Rally Cat, it can’t get any better than that and my oldest daughter runs a restaurant downtown. What else could I ask for?

“They all love it here and that is the thing that has made the quality of my life here so great. My family is so happy here.” 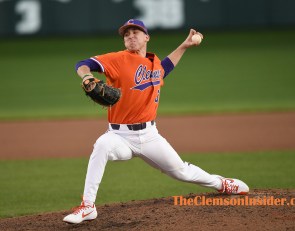 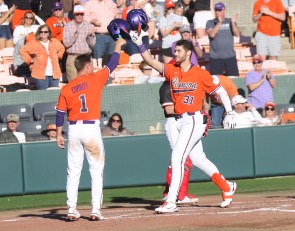