Each week The Clemson Insider brings you the latest Inside information on the Clemson Tigers in The Insider Report.

This week we have plenty of recruiting, a vacation update for Dabo, discuss whether Dexter Lawrence is a romantic and talk about the impact softball is already having at Clemson.

Right now, only one uncommitted quarterback prospect in the 2021 class holds an offer from Clemson: Washington (D.C.) Gonzaga five-star Caleb Williams. The Tigers got him back on campus for their elite junior day late last month and have legitimately been in the mix, though it may be an uphill battle for the Tigers to land him after signing five-star quarterback DJ Uiagalelei in the 2020 class.

Oklahoma looks like the team to beat for Williams right now and is slated to get another visit from him next month. LSU has also been in the thick of things with Penn State and Oregon in the conversation as well.

While the Tigers figure to continue pursuing Williams as long as they feel like they’re in it, they are also keeping their options open and staying in contact with other QBs in the 2021 class. One of those is Potomac (Md.) Bullis School four-star Christian Veilleux, who visited Clemson, Penn State and Tennessee during the recent contact period.

Another QB that has been getting some interest from Clemson is Westerville (Ohio) Central three-star Judah Holtzclaw. The 6-foot-6, 225-pounder participated in the Dabo Swinney Camp last summer and returned to campus for the Wake Forest game in November. He also visited Clemson to watch a spring practice last year.

Holtzclaw recently spoke with his area recruiter for the Tigers, Robbie Caldwell, and was invited to attend Clemson’s next junior day on March 7. Holtzclaw plans to compete in the Elite 11 regional in Atlanta on Feb. 29, so he is not yet sure if he and his father will be able to make the drive back down for Clemson’s junior day the following weekend.

Holtzclaw expects to take an official visit to LSU sometime soon and is set to visit Georgia Tech in a couple of weeks. Houston, Bowling Green, Buffalo and Central Michigan have told him that they want to see him throw in the spring or summer before pulling the trigger on an offer.

As far as Clemson is concerned, Holtzclaw is very high on the program. “Clemson is one of my top choices as far as schools I’m interested in,” he said.

As a junior last season, he threw for 2,110 yards and 23 touchdowns with seven interceptions.
Latest on McLaughlin
Another QB in the 2021 class we’re keeping an eye on is Alpharetta (Ga.) Denmark four-star Aaron McLaughlin, who had been committed to Auburn since last July before reopening his recruitment earlier this month.

A bunch of schools have reached out to McLaughlin since his decommitment, with Louisville, NC State and Miami communicating with him the most consistently right now.

McLaughlin has been in contact with Clemson a little bit on Twitter but hasn’t talked to any of the coaches of late. He says he would be receptive to the Tigers if they were to ramp up the interest. “I’d be definitely interested in Clemson if they reached out, but we’ll see,” he told TCI.
Another Mullen on the Radar
Looking ahead to the 2022 class, we wanted to give an update on Coconut Creek (Fla.) cornerback Trevell Mullen, the youngest brother of former Clemson and current Oakland Raiders cornerback Trayvon Mullen.

Trevell, a 6-foot, 150-pound sophomore, was named the Defensive Back MVP of a Rivals camp in Miami two weekends ago. He currently has offers from Indiana, Oregon, Southern Miss, Kent State, Coastal Carolina and Toledo, with many more offers likely on the way. Clemson is interested in Trevell but wants to see him fill out and add weight before potentially pulling the trigger on an offer.

Trevell told TCI that Clemson, Florida, Georgia and LSU are some of the schools he is looking to visit moving forward. He has visited Clemson a couple of times in the past as a recruit, not counting the other times he was on campus to watch Trayvon play.

Trevell says that once he is ready to narrow down his recruitment in the future, Clemson would definitely have a spot in his top five, if he has an offer from the Tigers. He loves the school, the campus and the atmosphere there.

As you would expect, Trevell and Trayvon have had conversations about Clemson. “He told me it would be a good fit for me and I would fit good at the school,” Trevell said.

Trevell’s second-oldest brother, Tiawan, is a cornerback at Indiana who was an honorable mention All-Big Ten performer as a freshman in 2019.

Is Dexter Lawrence a romantic?

Lawrence surprised Bonamy by showing up at the Tigers’ home opener last Wednesday night. He then stayed in town to watch Friday’s game against Maryland and then to treat his lady to a Valentine’s Day dinner.

Lawrence of course was the 17th overall pick by the New York Giants in last year’s draft. The former Clemson standout had a great rookie season. He was recently named the NFL’s best rookie interior defensive lineman by Pro Football Focus.

Bonamy played well last week. The graduate transfer from Notre Dame was 7-of-19 (.368) at the plate as the Tigers went 5-1 for the week. They were 4-0 in the ACC /Big Ten Challenge this past weekend at the Clemson Softball Stadium. She also hit a home run, had two RBIs and two doubles.

For the season, Bonamy is hitting .286. She has started every game at first base, while helping Clemson to a 7-4 record to this point. The Tigers have won five straight games.

Dabo hits the beaches of Hawaii

Each year Nike co-founder, and now chairman emeritus, Phil Knight takes all of the college football coaches whose schools are sponsored by Nike on a trip to an exotic destination. It is sort of viewed as a work vacation, if you will. Though is not a coaches’ convention per se, the coaches do talk shop.

This year’s trip is to Hawaii. Swinney is on the Hawaii Islands this week. He will return next week as the Tigers get set to begin spring practice on Feb. 26.

In 2018, if you recall, Knight took the coaches to Costa Rica.

We talked with a number of sources over the weekend about the start of Clemson’s softball program.

Everyone had the same response.  The launch has been a huge success.

Clemson fans have packed the stadium consistently and created an environment that has amazed everyone.  A softball game at Clemson has become “the place to be”.

Dexter Lawrence, Dabo and Kathleen Swinney and Clelin Ferrell were just a few to enjoy the atmosphere over the past week.

The team has responded to the energy from the fans by playing some great ball.

The hottest ticket in Clemson right now may be one to softball.

Fanatics is having a President’s Day sale with up to 65 percent off site wide.  Get your official Clemson gear right here! 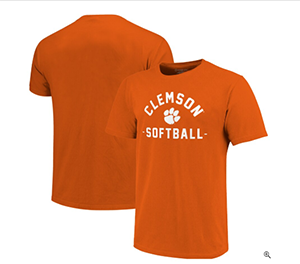