Travis Etienne knew he wanted to come back to Clemson for his senior year while playing a video game.

“I was on a game talking to one of my friends back home,” Etienne said Monday during his first media gathering since his announcement to return to Clemson on Jan. 17. “We were just kind of playing. We were just kind of talking about it and he gave me some great advice.”

The friend told Clemson’s all-time leading rusher he needed to use the same process that brought him to Clemson in the first place.

“Whatever you did to make a decision to come to Clemson, use that same thought process,” Etienne recalled from the conversation. “That just clicked right there. I knew what I needed to do and that was coming back and getting my degree.”

It also did not hurt Clemson’s chances when Etienne received a second-round grade by the NFL Draft Advisory Committee.

“I just felt like I could come back and improve that grade,” he said. “I do not have my degree, so coming back and then going second round, at least I will have my degree.

“Leaving for the second round has never been a dream of mine. I just think I can do so much better than that. The NFL is going to be there, and I was not leaving with a second-round draft grade.”

Etienne confirmed he pretty much knew what he wanted to do prior to sitting down with Clemson head coach Dabo Swinney before the Tigers’ College Football Playoff game against Ohio State in the Fiesta Bowl. He felt the conversation with Swinney was a good and open one, one he deeply appreciated.

“It was a heart-to-heart, having a truthful conversation about my skills and my development,” the running back said. “He was shooting to me straight. I was just being open to him and willing to be better.”

Etienne’s return means the Tigers have perhaps the most explosive and experienced players back at the major skill positions in the country. Etienne returns at the nation’s career leader in rushing yards with 4,038 yards, while Lawrence has thrown for 6,945 career yards and wide receiver Justin Ross has 1,865 yards on 112 career receptions.

Besides being Clemson’s all-time leader in rushing yards, Etienne also owns the school and ACC record for career rushing touchdowns (56), total touchdowns (60) and points by a non-kicker (372).

By coming back, Etienne has an opportunity to become the first player in ACC history to earn ACC Player of the Year honors three times and obviously, three consecutive years. He will also have an opportunity to break the conference’s all-time rushing record and, depending on how far Clemson goes in the postseason, the all-time record for all-purpose yards, as well.

In his first three seasons, Etienne is averaging 1,346 yards per season. If he matches his season average, it will put him near 5,400 career rushing yards. That would shatter Ted Brown’s all-time ACC record of 4,602 yards which he set from 1975-’78 at NC State.

The 5-10, 210-pound running back is just 565 yards shy of breaking the ACC’s all-time rushing record and 795 yards short of becoming the all-time leader in yards from scrimmage.

“I wanted to finish off the right way with a win. Coming in here and being better at special teams and continue to improve my craft and be a pro at my position,” Etienne said. 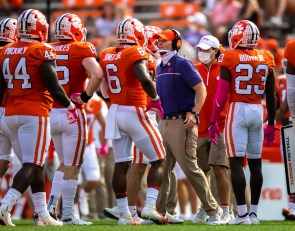 Clemson didn’t bring their ‘A’ game Saturday, but sill lead Syracuse 27-14 at the half. Check out some pictures from the ACC showdown in the first half Photo Gallery.